The $35 billion market for organic products has had a huge impact on the American food industry, and as its effects have rippled outward, it’s helped improve public health and the environment, too. Because of the industry’s growth, though, the companies that bring organic products to market are having an impact of their own on the building industry. One of them, United Natural Foods Inc. (UNFI), the largest independent purveyor of organic foods and health products in North America, currently has nearly 30 distribution facilities in the United States and Canada, and it’s building new ones every year to keep up with demand.

“I’m on a plane every week,” says Todd Newland, UNFI’s national manager for construction. Newland oversees four to six projects at once and has to constantly shuttle back and forth across the country to meet with his construction team, vendors, and representatives from the municipalities where the new facilities are being developed.

Distribution centers with freezer, cooler, and dry storage are the name of Newland’s game, and they usually run in the vicinity of 500,000 square feet, give or take a bit depending on the volume of merchandise that flows through them. UNFI’s most recently completed facility, a 450,000-square-foot space in Racine, Wisconsin, boasts a 36-foot indoor clearance for stacking pallets and 54 dock doors for semis, and the distribution center’s sustainable elements and careful siting exemplify its company’s development practices in general.

Many of the Racine facility’s features are typical of distribution centers. What separates the facility and UNFI’s other recent construction projects is, primarily, its care for the environment. “Sustainability features are a big emphasis for us as a natural foods company,” Newland says.

UNFI built the first LEED Gold-certified refrigerated warehouse in the country in 2007, and Newland has personally overseen two other LEED Gold projects since joining the company in 2012. The Racine facility and another just completed in Montgomery, New York, are also on track for LEED Gold, and Newland says it’s a benchmark that his company is “striving for on any new projects or expansions moving forward.”

At UNFI’s new facilities, there’s also energy-efficient LED lighting throughout, rainwater-recovery cisterns, on-site storm-water treatment ponds that double as wildlife habitats, ample bike parking, and shower and changing facilities meant to encourage employees to bike to work. The vast majority of the wood in the facilities is FSC-certified, their appliances are Energy Star-certified, and when they’re built, most of the construction waste is recycled rather than sent to the landfill. Even the carpets and office furnishings in the facilities are made from recycled or sustainably harvested materials.

In addition to preserving the health of the planet for future generations to enjoy, UNFI’s sustainability efforts pay off in the annual budget—especially in the area of energy savings. Newland is now seeing a 25–50 percent reduction below baseline standards in his distribution centers thanks to smart lighting and HVAC controls that trim power consumption wherever possible and variable-frequency fan drives that knock down cooling costs. ”We spend hundreds of thousands of dollars per year on electricity,” Newland says. “Being able to cut that by such a large percentage really adds to our bottom line.”

Distribution logistics has always been an exercise in efficiency, too. For example, Newland works closely with his company’s transportation team to determine the optimal geographic location for each new facility, based on where merchandise needs to be picked up from and moved to.

The company’s new New York facility is a response to increased sales on Long Island, an area that was formerly served by UNFI’s warehouses in New Hampshire, Connecticut, and Pennsylvania. By opening the new location, the company will better serve its New York market while saving money on transportation costs and reducing its greenhouse gas emissions by a corresponding amount.

ESI Group USA, a national firm, has been Newland’s go-to contractor for all its recent expansion work. It’s a streamlined design-build company that knows how to build to LEED standards, but it specializes in the food-service industry. “It’s not like they were building a hospital last week and this week they’re doing a distribution center for us,” Newland says. “They know what they’re doing. It’s a huge advantage.”

Through such partnerships—and through a continued focus on sustainability and efficient siting—UNFI should be able to maintain its pace of growth comfortably as the natural food movement continues to explode. 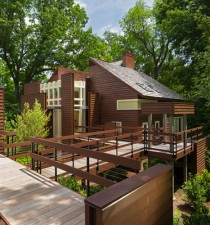 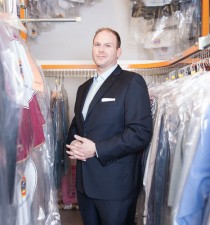 “We can grow the way we want to grow.” 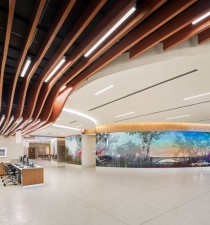 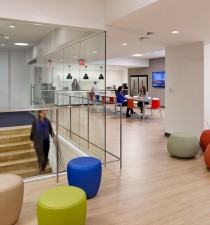 Doing Away With Walls