More than 15 years ago, Capital One’s leaders were planning for the future and expecting to enter a growth phase. With half of the company’s workforce located just inside the Washington, DC beltway and the other half located just outside, real estate executives signed a deal to acquire a 29-acre parcel situated at the intersection of two major highways on the site of a planned metro expansion.

Five years passed without much action, but in 2005, funding for Metro came online and Fairfax County started moving forward. County officials arranged a task force for the area known as Tysons Corner, and when they asked major stakeholders to participate, Capital One’s Barry Mark, vice president of workplace solutions, joined the group. After listening to plans for serious urban development at Tysons Corner, he worked with various constituents, including banking regulators, colleagues, and community and county partners to dismantle and reconstruct Capital One’s master plan.

“With the change in direction by the county, we saw the opportunity to take advantage of something new, and to do something special,” Mark says. “What we came up with is something that none of our competitors is doing.”

What was once planned to be a four-building development covering 1.1 million square feet morphed into a 4.9 million-square-foot campus complete with commercial space, corporate buildings, parks, residential units, and a performing-arts center. After gaining approval in 2014, Mark and Capital One are underway on the large-scale project which will open in phases starting in 2018.

Tysons is perhaps most unique for its blend of corporation and community. Together, key players formed the Tysons Partnership, a forum for collaboration between businesses, government, and the private sector as the entities work to complete one of the largest city redevelopments in US history. With 4,000 associates who will work—and maybe even live—in the community, Capital One has a major role to play in this unique effort.

Mark says Capital One is turning the development into a recruitment and retention tool. “Our associates have the chance to live, work, and play in this environment,” he says. “We’re turning the whole environment into an amenity that they will use around the clock.” The facilities will feature an amphitheater, coffee bars, a concierge, event spaces, a fitness center with a full-size basketball court, and public artwork. Tysons gives Capital One the chance to create a “sense of place” that standard banks can’t match. The typical protocol of parking in a garage, entering through security gates, and wandering cubicle farms to find a meeting simply doesn’t exist. Instead, clients, guests, and partners can arrive via metro rail, get directions from a concierge, pass an arts-and-music venue, and crisscross a serene park to approach the dramatic seven-story entrance of the tallest office building in Washington, DC.

A second phase on an adjacent block will be anchored by Wegmans’ first truly urban grocery store and another 100,000 square feet of commercial and retail space. That phase also includes structured parking designed as the podium for three future residential towers and the performing arts venue.

“Not only will this make us much more attractive to current and future associates, but we believe this will make them much more productive as we encourage the innovation and creativity Capital One is known for,” Mark says. “With the performing arts center, the best grocer in the United States, our retail plans, and our residential units, we are creating a phenomenal destination place.”

The five-year project does present some unique challenges associated with the pace of technology. Mark and his colleagues have designed the facilities to be as flexible as possible while also providing a robust infrastructure. Capital One will use sensors to determine when parking places are used, if a conference room is occupied, where the shuttle van is located, and when it will arrive.

“Our associates have the chance to live, work, and play in this environment. We’re turning the whole environment into an amenity that they will use around the clock.”

“The workplace is changing from one in which associates have a designated work space to one in which they have endless choices of places to work from quiet zones to outdoor restaurants to parks,” Mark says. One day, a Capital One associate could get a traffic alert with routing or parking information as he approaches the office. Or maybe he’ll tap a smartphone to order dinner from Wegmans. Today, Mark is specifying the bandwidth in buildings and outdoor spaces to accommodate these changes as they come online.

While Capital One’s rezoning application was making its way through the entitlement process, the CEO and his team were embarking on an ambitious effort to transform the company into a leading digital bank. Capital One’s executive team quickly realized that having a truly fantastic space to live, work, and play in the middle of an urban corridor laden with tech talent would only serve to enhance the recruiting and retention effort. The Tysons project shows that Capital One understands what it will take to win in the future—and that the bank is willing to do what it takes to attract talent, encourage innovation, and inspire associates to do great work.

A Wegmans grocery store will anchor another city block of prime commercial space, including two additional restaurants and six smaller retailers. Those retailers will anchor the ground level of the block. Above Wegmans, designers have planned three towers that will hold up to 850 residential units. Although retail leases have yet to be signed, executives are targeting top brands in tech and apparel. The project is slated for completion in late 2019.

Capital One hired renowned architect Rafael Vinoly for a 1,500-seat performing arts center that will become a premier facility for internal engagements and double as a multi-purpose venue for Broadway productions, rock concerts, speaking engagements, and symphonies. The 100,000-square-foot space will open its doors in 2019.

Capital One’s new corporate building will be visible from most of Washington, DC and illustrates just how large and prominent Tysons is about to become. The sleek design features a glass curtain wall and a 70-foot, LED-lit crown as well as an eight-story podium that houses all support functions. The building will house 3,000 associates and a full-service cafeteria with about 10 food venues, one of which will open onto the terrace for outdoor dining. 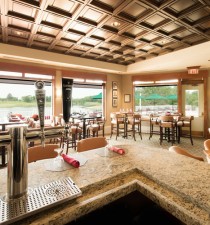 Ivanhoe Club’s Links to the Future 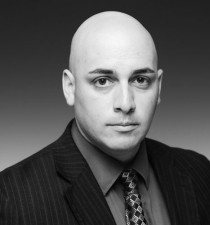 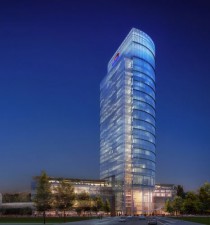 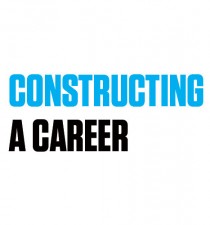