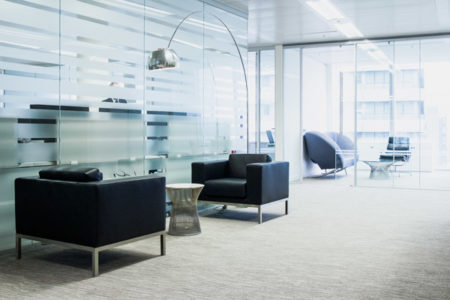 In 2014, CoreNet Global, the global association for corporate real estate, conducted a worldwide survey of 465 companies across multiple industries to determine the mindset driving office-space design. The results stated that by 2017, companies expect to reduce their average space per employee by 33 percent from 2010 levels. That made the real estate management team at Duff & Phelps start thinking.

Duff & Phelps is a leader in global valuation and corporate finance, with expertise in complex valuation, dispute and legal management consulting, M&A, real estate, restructuring, and compliance and regulatory consulting. With more than 2,000 employees serving a diverse range of clients from offices around the world, Duff & Phelps wanted to determine how it was managing its real estate footprint.

“Most importantly, what would it mean if Duff & Phelps started to reduce our space allocation per person?” asks Tom Thomas, the company’s vice president of global real estate and facilities management. “What would that translate into in cost savings for our real estate portfolio?”

To answer such questions, Duff & Phelps hired Ted Moudis Associates in 2015 to conduct a workplace survey. It selected 15 key office locations across Europe, Asia, and the United States to achieve the best overall picture. A detailed, written survey asked how the offices used meeting spaces, how much space was allocated for hard-copy paper storage, and whether employees would be willing to work in a more open environment if also given private areas to conduct personal business, in addition to other questions.

“We found that we were not making good use of meeting space,” Thomas says, adding that larger rooms that could hold up to 20 people were more often serving meetings of just three to four. “We had too many big rooms with small meetings in them.”

After asking Duff & Phelps’ legal and compliance teams about the storage question, his team learned that many offices were holding on to too much paper unnecessarily. The team reasoned that these were two areas that could easily be reconfigured to save space.

That’s not to say that all survey results aligned with their plans for office design. When asked if they would be willing to sit in more open work environments if given alternative spaces for privacy and better amenities, 39 percent of employees said no, 22 percent said yes, and 39 percent said maybe. Nevertheless, Duff & Phelps decided to move forward. The company’s standard was about 250 square feet per person, including office, meeting, and common spaces.

“We said, ‘Let’s cut that to 150 square feet’—a 40 percent reduction,” Thomas says. He and his team have since been able to apply these changes in multiple existing offices and in new construction projects throughout the world.

Change For the Better

At its New York City headquarters, Duff & Phelps is in phase six of a 10-phase redesign of its two-floor, 60,000-square-foot office space at East 52nd Street. Understanding that these multiple phases would take time, the company wanted to ensure that the business’s function wouldn’t be heavily disturbed. Phased work allows the company to shift workers out of construction zones, and some are allowed to work remotely to minimize disruption.

In the new, open floor plan, top-level managers still get an office, but other employees will move out of their “cubes” and into shared space with newly designed, bench-style workstations.

“We are demolishing a significant number of offices,” Thomas says.

Conference room size has also been reduced, and phone rooms have been added so employees can, say, call the babysitter or car mechanic in privacy. In addition, public spaces such as lunchrooms are being upgraded for a better aesthetic, with the hope that employees will use these spaces for impromptu meetings and collaborations. At its expected completion in the first quarter of 2017, the redesign will open enough space to take Duff & Phelps’ occupancy rate down from about 95 percent to 80 percent, he says.

Although the team hasn’t yet been able to put lunchroom spaces on the floors’ perimeters for better views, they have opened the space to allow more daylight into the general staff space. Despite the concerns expressed in the survey, staffers seem to like the changes.

“The feedback is positive,” Thomas says. “People feared they would be sitting in a trading-room type of setup, but we tried to make it nicer than that, and people are saying their fear was worse than the result. We hear things like, ‘I like it. It’s light and bright. I think it was a change for the better.’”

Updates have been especially popular with younger employees. Asked to rank five areas that were important for their career advancement, they cared less about private offices than about growth in skills and knowledge.

“We are creating standards in line with the thinking of our junior people, who are the future of the company,” Thomas says, adding that younger workers also appreciate using and storing less paper. “Culturally, we can say we are going more paperless, and the younger generation appreciates that we are environmentally conscious.”

As for older employees, Thomas admits that some may find the change a challenge—but not everyone.

“I had a managing director, our highest-level director, come to me and say, ‘Can I get a temporary space added within my office for another director to come in and use?’” Thomas says. “He didn’t mind sharing his office when the time was right. I can see more managing directors doing that in time.”

For the most part, he says, everyone can see what the company is trying to do, and that it is in line with other financial-services firms.

Duff & Phelps staff are on board across the globe, including employees at its new London offices. The offices are housed in the city’s new, iconic mixed-use tower, the Shard—named as such because the building’s design resembles a shard of glass. The Shard’s irregular shape proved to be a bit of a challenge, Thomas says, but Duff & Phelps overcame that irregularity, building 30,000 square feet of office space on two floors. The open format and the buzz of the building have made it “a super exciting place to be,” he says.

“Whenever our clients in London want to have a meeting, they all want to do it over at the Shard.”

Leadership at Duff & Phelps knew they couldn’t conduct this study on their own, so they called in the help of Ted Moudis Associates (TMA). As part of the team that put the questions together, Judith Carlson, TMA’s workplace analyst, explained the third-party perspective to American Builders Quarterly.

Are the survey results in line with other surveys done for similar companies?

Each individual company has their own set of challenges and opportunities. While the results differ greatly across the board, we see a lot of correlations between the desire for better amenities and more flexible work environments.

Were you or Duff & Phelps surprised by the results?

I don’t believe Duff & Phelps was surprised by any of the results in the survey, but it did help us identify what challenges we would be facing, what opportunities were available to us, and critical success factors that employees desired with regard to presenting them with ideas for new ways of working.