As the senior associate athletic director for the University of Illinois, as well as an alumnus, the college has been a staple in his life for decades. “Being a fan my whole life, and now working for University of Illinois Athletics, it actually gets me emotional,” Stillwell admits. “It’s a perfect circle.”

Stillwell grew up in Mahomet, Illinois, just a few miles from Champaign, where the college is based. Before spending time in the private sector and transitioning into his current role, Stillwell earned both his bachelor’s and master’s degrees in architecture from the University of Illinois.

In 1980, when he was an undergraduate, Stillwell recalls being inspired by an epic football game against Ohio State. The Illini lost the game 49 to 42, but it was an impressive performance against one of the top teams in the nation, especially for a program that had struggled to even be competitive throughout the 1970s. The Illini’s quarterback, Dave Wilson, threw for 621 yards and set an NCAA single-game record. “In that particular moment, I realized that we could compete with the elite football teams in the nation,” Stillwell says. “It was at that point that I thought ‘we can do this.’”

Now with a key role within the Illini athletic department, Stillwell’s work directly contributes to the University of Illinois’ race toward athletic prowess. “I’m incredibly grateful for the ability to combine my love for architecture and my love for athletics into one job,” he says.

The Smith Football Center will launch this fall, equipping the Illini’s football team with a world-class training facility. After engaging in extensive due diligence visiting the Texas A&M and Oklahoma Sooner football facilities, among others, Stillwell and his team managed to get the $80 million facility up and running in 20 months—“lightning speed,” Stillwell says, for a public institution. The behemoth not only includes a rooftop terrace, an outdoor kitchen and dining area, two bowling lanes, and a mini-golf course, but also, according to Stillwell, “the best sports medicine facilities in the Big 10, and possibly the nation,” in reference to the hydrotherapy chambers and recuperation pools.

Stillwell believes successful student athlete recruitment is inextricably linked to high-quality athletic facilities—and the Smith Football Center, named after gracious donors Henry Dale and Betty Smith, is expected to change the game for Illini football recruitment. As an addendum to the project, the old football training facility will be gutted, renovated, and expanded into a superior Olympic sport facility for the other Fighting Illini athletic programs.

“Multipurpose use is critical to being efficient,” Stillwell notes, highlighting his emphasis on “win-win” projects. A brand-new soccer and track facility, Demirjian Park, is perhaps Stillwell’s premier example of a “win-win”: the new facility will involve a dual-use stadium for soccer and track, and it was already selected to host the Big 10 track and field championship in spring 2021.

“Hosting these events is pivotal to let everyone know that the University of Illinois is a significant player in ‘power five’ sports,” Stillwell says. The university also won bids to host the Big 10 Conference Softball Tournament in 2020 and the NCAA Division I Tennis Championship in 2022. “It’s a ton of work, but the entire staff does an amazing job of showing University of Illinois’ best.”

One of the most unique projects that Stillwell is working on, though still in its developmental stages, is the downtown hockey facility. The National Hockey League conducted a study that determined, of all Division I universities without a hockey team, the University of Illinois was the number one school that could support and benefit from one. Since the facility would be off-campus, the entire Champaign community could reap the rewards of the estimated $110 million that would go into its construction. “It’s an outreach that puts us into the very community that supports us, and that’s really exciting,” Stillwell says. By adding a revenue sport like hockey, the facility will also be able to support Illini volleyball, wrestling, and gymnastics—once again exemplifying Stillwell’s “win-win” mind-set.

When the new architecture building at the University of Illinois was built, Stillwell was serving as president of the Illinois chapter of the American Institute for Architects and became the first speaker to commemorate its launch. An architect, a fan of athletics, and above all a true ‘Fighting Illini’ to his core, Stillwell is dedicated to enhancing the student athlete and fan experience for his beloved alma mater. 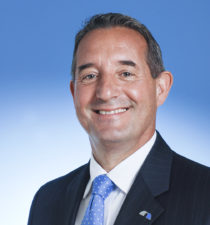 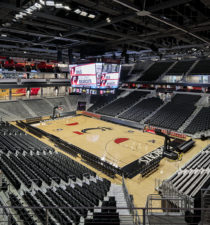