At Old Dominion University (ODU), the College of Health Sciences bustles with students, faculty, and staff who have a collective interest in understanding the human body and maintaining its well-being. So when the university announced that the rapidly growing college would be getting a new, state-of-the-art facility, the design needed to reflect the mission.

“The College’s number one priority was having a healthy building,” University Architect Jean Kennedy Sleeman says. “That’s what influenced us as we went along.”

She compares the movement and interconnectivity inside the three-story building—scheduled to be completed in summer 2023—to the human body. Entering through the open-roofed atrium reveals a circulatory system of stairwells, elevators, and passageways that lead to the schools of dental hygiene, rehabilitation sciences, and medical diagnostics and translational sciences. One can glide from a teaching laboratory to a classroom to the physical and occupational therapy clinic with lightness and purpose.

Even the word “atrium” fits in with Sleeman’s anatomical metaphor—in addition to its architectural definition, it also refers to the chambers of the heart.

While the health sciences building is the most prominent of Sleeman’s current physical projects at ODU, its design, planning, and execution embody her comprehensive strategy for improving the university’s design processes and standards. When Sleeman arrived at ODU in 2015 as a department architect—after more than three decades working in the private sector as a project manager—she spent two years interviewing facilities employees from across the campus. She identified what could be improved, then published the standards in a tangible document—something the university had never done before.

Sleeman describes the design standards as wide-ranging and dynamic, able to change in order to meet the evolving needs of the university. For example, the onset of the COVID-19 pandemic meant that every public bathroom on campus needed a paper towel dispenser in addition to an electric hand dryer (since people might want to use a paper towel to open the door when they leave).

The standards include aesthetic decisions as well. For instance, in the section on campus design, Sleeman researched and laid out the school’s architectural trends, history, and overall philosophy. Designers hired by ODU can now refer to the standards to make sure their work is in line with the school’s unique visual identity.

“Relatively speaking, we’re not that old of a school,” Sleeman says. “ODU was founded in 1930 as the Norfolk Division of the College of William & Mary. In 1962, when the ODU became an independent institution, the architecture was the furthest thing from William & Mary’s Georgian colonial style as you could get. Clearly, the campus was trying to establish its own architectural identity. It was really telling.”

Sleeman describes ODU’s architecture over the years as a mixture of classicism and modern buildings that sprang from the school’s independent growth period in the 1960s. In the design standards, she strives to honor this diversity of styles.

“We need to be modern and contemporary, but not over the top,” she says, noting that there are two common threads among ODU’s structures. One is the finite set of materials used for construction— brick is prominent throughout campus—and the other is curves.

“We love to use curves,” Sleeman says. “I ask in our standards that a curve be incorporated into every project, and that can be in any way.”

Naturally, there’s a defining bend in the health sciences atrium, composed of a two-story glass wall underneath the building’s facade. “It reflects the idea of the movement inside,” she notes.

The standards aren’t the only piece of ODU literature Sleeman has crafted. In her quest to keep improving the quality of design at the school, she’s begun implementing a design primer every time a new project begins. The initiative was born while she was shepherding the new chemistry building through its first phase of design. During schematics, the department chair asked when construction would begin even though there was a year left in the design process.

“It dawned on me that none of the users had done his before,” Sleeman says. “They had no idea how much time or effort it takes, and why should they? So I ended up writing this design process primer, and I wrote it in very basic language—not my speak, but everybody-speak. It’s just a little document that helps everyone understand how the project is going to unfold. But I also try to describe when they can make changes. In very basic terms, ‘This is what you need to focus on in this phase because in the next phase, we can’t change that.’”

Because of Sleeman’s considerable amount of time in the private sector, she’s uniquely suited to bridge the communication gap between users, architects, and engineers.

“I used to be on the side of the table that helped write the proposals,” she says. “Now I’m on the other side of the table, where I get a stack of 20 proposals and I have to short-list them, and then we have to vote on them. I understand both sides.”

The improved communication makes projects such as the new health sciences building—and Old Dominion University’s architecture as a whole—that much more successful. It means healthier buildings, healthier relationships, and a healthier campus.

Jeremy Cogan Snaps Schools out of the Past 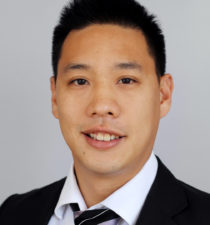