During his 23 years in the construction industry, Kevin Richter has taken on just about every role and duty imaginable—facility operations, project management, you name it.

But as administrative director of operations for the South Texas healthcare provider Methodist Healthcare System, he’s now getting to do something for the first time ever in his career: oversee a project from the ground up, all the way to completion. This personal milestone—or, as Richter eloquently puts it, his “pinnacle”—arrives in the form of a new medical campus in the Westover Hills community of San Antonio.

“It’s a region of San Antonio that’s just growing substantially,” Richter says of Westover Hills, a development situated in Texas Hill Country near an ever-growing network of restaurants, shopping centers, freeways, and entertainment venues. “That’s why Methodist Healthcare picked it. We already have a huge reputation here, so we viewed this as an enormous opportunity to bring the best healthcare imaginable to the area.”

Anticipating the expansion of San Antonio (the US Census Bureau declared it the fastest-growing city in the United States in 2017), Methodist Healthcare purchased more than 70 acres of land for its medical facilities all the way back in 2006. The company opened its Westover Hills emergency room facility in 2019, and its current plans for the medical campus include both a 100,000-square-foot medical office building and a full-service hospital next to it, with space for two more office buildings in the future. The entire project is a joint venture with the Hospital Corporation of America—one of the largest and most renowned healthcare systems in the country.

Richter describes the Westover Hills hospital as a “hotel-style” building, with high-end finishes and a more open floor plan. “You walk in, and it feels like home,” he says. “A lot of new hospitals are going that way now.”

The clearer floor space will provide plenty of room for what Richter calls a “welcoming feeling,” with three stories slated (with the capability to go up to six) that are capable of containing 54 beds, an imaging center, and women’s services floor. The surgical room layouts will provide enough space to cater to all stages of surgery, as well as Da Vinci surgical robots in the operating rooms themselves. That means less recovery time for patients, a lower risk of infection, and an overall increased connection to technology that will put Westover Hills at the forefront of innovative healthcare.

Even with such a long career behind him, Richter describes the Westover Hills campus as educational, giving him a firsthand look at just how much teamwork and time goes into a project of this magnitude. That second aspect became even more surprising when the COVID-19 pandemic forced him and his team to delay construction. Richter still remembers all of his team’s flights getting canceled and having to put various safety measures into play at projects with builds already underway, including shuffling around floors and designating specific hospital areas for treating COVID.

Richter anticipates that the Westover Hills campus—originally slated for completion by fall 2021—will now be completed between fall 2022 and spring 2023. But he isn’t phased.

“If it wasn’t for the pandemic, we would be building right now, at this very moment,” Richter affirms. “I feel confident in saying that. There was never any doubt that we would come back after tabling the project for just a bit. Everyone pulled through it and worked together as a team, and here we are now. Hopefully we can break ground in four to six months.”

When asked how Richter kept up team morale during a global pandemic and what it will take to bring the Westover Hills project to completion once construction is underway, he chalks up success not to some magical formula but rather a few simple qualities—namely, communication and integrity.

“I pride myself on being pretty straightforward,” Richter says. “I’m willing to listen and work things out if we need to. I just expect truth and honesty from other people in whatever venture we’re doing. You get more respect all-around that way.”

Richter recognizes that the breaking of ground—and eventual completion—of a construction project will be satisfying in and of itself. But the Westover Hills campus will also come with an added gratification, other than the fact that it will be a career first for him: he’ll get to witness firsthand how his role in the project will better the lives of others.

“I realized pretty early on that we were getting to help out the community,” he says. “When I get to see that first person walk through the door as a patient and receive incredible healthcare, that will be very rewarding—just to be a part of a mission that’s committed to the care and improvement of human life, something that’s bigger than myself.” 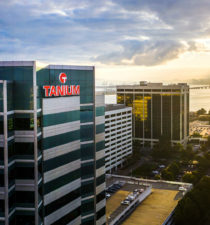