From all-gender restrooms to ultraaccessible facilities, Jen Nguyen is designing spaces that empower all of Pinterest’s employees to excel

For some people, the word “start-up” calls to mind a very specific type of employee: probably young, male, and an engineer. But that stereotype is becoming less and less true, and Jen Nguyen has made it part of her mission to prove it.

Nguyen, the head of workplace at the visual discovery app Pinterest, is passionate about start-ups. She’s also passionate about sharing her experience with her peers that people in a variety of careers—and not just engineers—can have rewarding careers at start-ups. “I didn’t need to be an engineer to work for a start-up company,” she says. “I still had the same experience and the same career path as a non-engineer, which has been so fulfilling for me.”

Nguyen didn’t always know that she’d end up in a role like her current one. When she landed at job at tech company SGI after receiving her MBA, “I thought I’d landed the job of my dreams,” she says. “I was so excited to be working for a company like this, working in a cubicle.” But after only a week in her role Nguyen realized that she was so unmotivated and uninspired to be working behind a desk. She eventually left that role.

After discovering what she didn’t want for her career, Nguyen had to discover what she did want. She began working for a variety of small start-ups and almost immediately fell in love with the challenge and opportunities that were presented to her. “I loved the idea that you can be involved in the early stages of companies from the ground up, and since I was nontechnical, I’ve always worn multiple hats,” she says. “I was involved in marketing, HR, accounting, finance, and in building and running the office.” Roles like this at companies such as Success Factors, Tesla Motors, and Zynga led Nguyen toward a focus in real estate and facilities before she began working at Pinterest in 2013.

Pinterest was a relatively young company when Nguyen was hired. “The idea that I could be on the ground floor of building a team and real estate strategy was definitely enticing,” she says. She initially joined a two-person team that was in charge of a single facility in San Francisco; her team has now expanded to more than 30 people who are in charge of offices in 15 cities around the world. Nguyen’s team is responsible for Pinterest’s real estate, design and construction, logistics, and operations, and Nguyen oversees these core functions while also staying focused on strategy for the company’s future.

Many people who have worked with Nguyen admire her leadership abilities, including Amirali Shakoorian of Urbanworks. “As an inspiring leader, Jen has an uncanny ability to recognize talent, build a team, and provide the support for everyone to produce their best,” Shakoorian says. “Incredibly, almost everyone who’s worked with Jen on her projects has continued their working relationships on other opportunities, which is a testament to the bonds she fosters between teammates.”

A focus on diversity and inclusion has been a driving force in some of Pinterest’s real estate decisions, and Nguyen believes that the company’s emphasis on diversity comes from the top down. “Pinterest had the foresight to promote diversity way before you started hearing about it today from other start-ups,” she says. “And Evan Sharp, Pinterest co-founder highly encouraged me and gave me the autonomy to design for inclusivity.”

That autonomy became a necessity when Pinterest began recruiting a candidate who required ADA accessibility at Pinterest’s 651 Brannan office. When the candidate was ultimately hired, the company had about three months to retrofit a building it had literally just finished. “It was intimidating at first, only because this endeavor had not been done by many companies,” Nguyen says. Many of the architects and contractors that Nguyen spoke to were focused solely on complying with ADA requirements, but that wasn’t enough for Nguyen—or for Pinterest. “We had a different perspective on it,” she says. “We looked at it as, how do you take the ADA standards and enhance them so you’re not just meeting a minimum requirement?”

Nguyen and her team decided that their ultimate goal would be not only compliance, but ensuring that their space would allow employees with disabilities to feel truly independent at the office. “Independence means accessibility of getting in and out of the building and accessing amenities like restrooms or quiet rooms,” she says. “It also means the ability to be able to serve yourself in our food line.” And while Pinterest was completely on board with this process, Nguyen says it’s another challenge to encourage our landlords, developers, and designers that this was something that was achievable and still be able to keep it within a reasonable budget and time frame.

To help get all stakeholders on the same page, Nguyen and her team reached out to local nonprofits who helped to educate Pinterest employees and partners alike about how to reach their ambitious goal. Pinterest also worked with Erick Mikiten, an architect who uses a wheelchair and specializes in Universal Design. “He was an invaluable consultant who educated us on how to take baby steps to reach our goal,” Nguyen says. Ultimately, they accomplished that goal, achieving ADA compliance and going beyond the requirements both at 651 Brannan and at Pinterest’s other offices. The process has felt personally rewarding for Nguyen. “I’m extremely proud that we’ve been able to create inclusive design at Pinterest,” she says.

Inclusive design doesn’t stop at physical accessibility, however. “We talk about diversity in terms of providing a lot of opportunity for different gender identities,” Nguyen explains. “We wanted to take that a step further in how we could incorporate that in the design of our space.” So, in 2015, Nguyen and her team began the process of designing and retrofitting all-gender restrooms throughout Pinterest’s real estate portfolio. As with the process of making Pinterest’s real estate accessible, the project had to begin with education. “We had the right groups of people within Pinterest who promote diversity endorse how great this was,” she says. 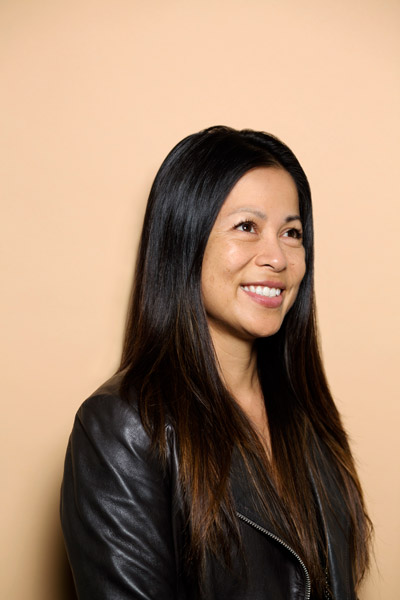 Ensuring the comfort of all Pinterest employees was top-of-mind throughout the process. “We made sure that there were options for everyone, depending on their comfort level,” Nguyen explains. “It wasn’t a forced choice. We thought a lot about design and what makes people comfortable when they’re using these amenities.” The all-gender restrooms were designed to balance privacy and accessibility, and movement was a priority, as well. “We made sure that there was a lot of movement through the space because when there’s a lot of movement, you don’t feel like you’re confined,” Nguyen says. All-gender restrooms have been a success at Pinterest, and it’s easy to see why. “We made sure that the amenities in there were better than our standard amenities to encourage employees to use these facilities,” she explains.

Nguyen wasn’t content to stop at promoting diversity through Pinterest’s physical spaces, however. She believes that socioeconomic diversity is an often-overlooked area—particularly at start-ups, where diversity initiatives often focus on engineers. To address this and develop skills to be successful in the workplace, Nguyen and her team provide English as a second language, writing, and business etiquette classes for team members. Nguyen wasn’t content to stop there, however. “I asked Pinterest leadership to expand diversity into nontechnical areas; for example, providers who perform physical security, logistics, janitorial work, and culinary services,” she says, “who typically travel the farthest as they can’t afford to live in San Francisco but don’t have a voice and don’t have the same benefits. So I said, ‘Let’s take baby steps. Let’s see if we can extend that opportunity to this representative group as well.’” Pinterest was receptive to this initiative, which, according to Nguyen, is uncharted territory for many similar companies. “For Pinterest to adopt this was transformational,” she says.

Nguyen believes that other companies in Silicon Valley are starting to catch on to the value of promoting diversity as well. “For one of the projects that we’re building from the ground up here in San Francisco, it wasn’t even a second thought for our landlord developers to even consider doing all-gender restrooms and showers,” she notes. “Where in the past, that would not have been considered as part of the base building, now they’re starting to see that it’s something they should do—and how it actually attracts tenants like Pinterest.” And when it comes to other start-ups who want to follow Pinterest’s lead on diversity, the answer is simple. “It just takes baby steps to make a difference,” she says. “It just takes one person or one all-gender facility.”

The importance of diversity and inclusion is a central part of Pinterest’s values, Nguyen explains. “Diversity has created the community that we have here at Pinterest,” she says. “Through diversity, you have many lenses. You can’t capture everything under one lens.” Looking to the future, there’s no doubt that Nguyen and Pinterest will be at the forefront of promoting diversity, and encouraging their peers to take small steps toward a more equitable future. “One of the things I love about being here is that it’s a company built to inspire,” Nguyen says. “The whole idea of the Pinterest platform is that you can always be inspired to try new things.”

Brereton provides workplace solutions for clients who want personal commitment and problem solving to enable design. Leveraging expertise in workplace, design, technology, and sustainability, we partner with clients to create dynamic and compelling office environments. We are passionate about serving our clients and the communities where we live and work.