If you believe the old adage that you eat with your eyes, that might explain why reflecting sustainability in designs is so important to John Simeonidis Jr. as he continues to keep the look of the organic-focused Bareburger brand fresh 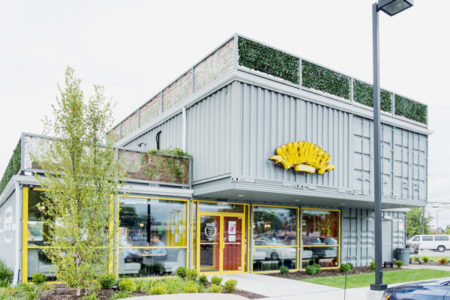 John Simeonidis Jr., cofounder and chief design officer of the New York-based organic burger chain Bareburger, has a dream job that keeps him on the run.

Simeonidis is very hands-on when it comes to the look and feel of Bareburger’s 40 locations around the world. The business, which he launched with partner Euripides Pelekanos in 2009, is constantly evolving its environmentally conscious look to match the local and organic menu offerings and stay ahead of the competition.

“Our flooring, ceilings and wall coverings, and all our furniture are made from sustainable or recycled materials,” Simeonidis says. “Our newer locations use LED bulbs in all the lighting fixtures and we try to use as much Energy Star-rated equipment as possible. Our washrooms are outfitted with Water Sense-certified fixtures, high-efficiency hand dryers, framed mirrors made with recycled wood, and old mason jars turned into soap dispensers.”

Simeonidis strives to have everything made locally, ideally by artisans and small vendors. All the wooden tables, chairs, stools, countertops, and millwork pieces are made in the United States from reclaimed and FSC wood by small vendors such as Ohio-based Unique Custom Furniture LTD, which he’s worked with for seven years.

Any art pieces or location displays are either salvaged or made by local artists. This sustainable philosophy was borne out of need with the first Bareburger location.

“Instead of spending money on new pendant shades for our lighting, I decided I’d make the shades using a bunch of old forks, knives, and spoons that my great-grandfather had ‘borrowed’ when he was working in various New York City hotels,” Simeonidis says. “They were sitting in a wooden chest at my mother’s house, so I figured I’d put them to better use. They still hang over the bar at the original location.”

Artfully made bear heads can also be found in every single restaurant, including all of its restaurants overseas. Simeonidis found a Texas-based artist, Jennifer Khoshbin, who wraps papier-mâché faces of bears in various patterns and colored papers. These pieces have become an unofficial seal to every project Simeonidis has completed.

The best thing about using local artisans, he says, is that no two works are ever the same. There’s a degree of unpredictability he likes both personally and professionally, because sustainability is now a staple in hospitality design.

“Everyone has the same look and I’m very aware of that,” Simeonidis says. “But I’m always surprised by the crafty new ways vendors and artists are able to use sustainable and reclaimed products. It’s honestly what gives me the opportunity to change the design from project to project.”

Since Bareburger first opened, however, that look comes at a greater cost, with prices for décor and building materials tripling in some cases.

“There’s more supply now because everyone wants that look,” Simeonidis says. “I have to change our look every year. For some people, that’s a headache, but I have to keep it fresh.”

One of his latest projects allowed him to reuse eleven 40-foot shipping containers, stacked and cantilevered, to construct a 3,500-square-foot restaurant in Plainview, New York. The project was Simeonidis’s first opportunity to build a new building as opposed to retrofitting an existing space. He saw it as a way to push the definition of a sustainable environment while keeping to his sustainable philosophy.

One of his latest tweaks is to the walls of Bareburger restaurants, which once featured reclaimed barn boards covering the walls from floor to ceiling. Simeonidis scaled that back, using the wood only as wainscoting and opting to cover the remaining portion of the wall with artwork.

The passion Simeonidis has for constant change makes sense in the context of his career path. He graduated from St. John’s University with a pre-med degree. On the day he was set to take the Medical College Admission Test, he had an epiphany: he wasn’t interested in becoming a doctor.

Instead, he got job as a New York City health inspector, which gave Simeonidis his first exposure to the restaurant industry. He inspected everything from five-star fine-dining restaurants to the seediest dives in the city, and everywhere he went, he enjoyed the hustle and bustle.

“I quit a year into it,” Simeonidis says. “I didn’t have it in me to walk into a mom-and-pop restaurant and issue a few thousand dollars in fines that might put them out of business.”

The natural assumption is that this is the point Simeonidis finally got into the restaurant business himself. In 1999, however, he got a job as an international tax specialist at KPMG LLP.

“I knew it wasn’t for me from day one, but they said I was good at it and sent me to Hong Kong for a few months,” Simeonidis says.

While in Hong Kong, Simeonidis got an e-mail from Pelekanos, who let his old friend know he was opening a bar in Brooklyn. When one of the business partners pulled out of the deal, Pelekanos asked if Simeonidis was interested.

“I definitely was, so he told me to quit my job and come back to New York,” Simeonidis says.

It took them about a year, but Pelekanos and Simeonidis opened their bar, Sputnik, in 2002. It was a live-music venue with a bar and kitchen, furnished with random chairs and tables the duo got cheaply off eBay.

“We were in our early 20s at the time with no funding; just a bunch of credit cards we maxed out,” Simeonidis recalls. “This was right after 9/11, when the no-smoking ban in New York City hit.”

Their timing wasn’t great, but they made it work for seven years. In 2008, they finally realized neither they nor their bar could last much longer.

“It wasn’t going anywhere after what happened to the financial market,” Simeonidis says. “The one thing that did still work was the organic burgers we were serving out of the kitchen. We decided to develop a concept around that, which also took a year to partner up with a few people, find a location, and hammer out the details.”

From the very beginning of the business, which now includes 40 locations worldwide, Simeonidis said he knew the design of every location had to match the ethos of the food.

“I saw the need for that even when I was a health inspector,” he says. “The restaurants that were always busy had a thought-out, cohesive brand. The food matched the brand and décor. It all worked together.”

Simeonidis has it all working together at Bareburger, although he’ll soon be tweaking the sustainable décor again.

“I don’t know where sustainability is going with restaurants, and I think that keeps it fresh for me,” he says. “I’ll just take it one design at a time.”