With a 15-year bridge project now complete and a major high-speed rail project underway, Mark Rolfe and John Bernick of Connecticut Department of Transportation discuss the effort it takes to ensure commuters a smooth ride

Mark Rolfe has a unique perspective on the development of the Q Bridge. As a contributor to the project since its design in 2001, he has seen the project come full circle.

“My involvement began as the program manager overseeing the design development of the Q Bridge and other projects included in the I-95 New Haven Harbor Crossing Corridor Improvement Program,” says Rolfe, construction administrator for CTDOT. “In 2009, I became the district engineer overseeing the construction of the Q Bridge and other projects in that area of the state. It’s extremely gratifying to see project designs that you worked on years before being constructed, and now completed. As an engineer, and for me personally, this is the culmination of 15 years of work.”

It’s also the culmination of a major endeavor for CTDOT. In addition to the use of both 3-D and 4-D modeling to aid design, the project was the first bridge in the United States to be built as an extradosed, cable-stayed structure. This type of bridge combines the features of a segmental bridge with those of a cable-stayed structure. The shorter towers create a shallower angle for the cable stays, resulting in a larger compressive force on the concrete segments than on a typical cable-stayed design.

The extradosed design originated in Switzerland, although most bridges that use the design are found throughout Japan and South Korea. Rolfe says the design was not only well-suited for the bridge’s proposed span lengths of about 500 feet each, but also because the shorter height of the towers on the bridge are well-suited to accommodate flight patterns both in and out of nearby Tweed Airport.

The challenges of constructing a major bridge notwithstanding, Rolfe says the Q Bridge was also just one of more than 30 construction projects included in the reconstruction program, with up to eight projects active at any one time. This required contractors to work simultaneously on multiple interfaces and necessitated extensive public outreach and coordination to keep traffic moving through heavy construction zones. Stressful as it might have been at times, Rolfe says those efforts were an overall success.

“Resources were stretched, and coordination among the contractors was an ongoing and never-ending challenge,” he says. “But consistent, accurate communications provided transparency that fostered public trust and provided the community with a sense of ownership in the project.”

High-speed rail is beginning to make literal tracks in the United States—particularly in the Northeast.

CTDOT’s New Haven–Hartford–Springfield rail program is a partnership between the state of Connecticut, Amtrak, the Federal Railroad Administration, and the states of Massachusetts and Vermont. The goal is to bring commuters working or traveling in the region upgraded rail service. Specifically, it will connect existing rail lines to other high-speed services in major metropolitan areas such as New York City and Boston.

John Bernick, assistant rail administrator for CTDOT, says public outreach is a priority for the agency and will continue to be through the Hartford Line’s scheduled opening in January 2018. The reason, he says, is simple. Just as highway construction projects pose delays and inconvenience for drivers, major railroad construction projects can prompt just as much of a headache—and not just for commuters.

“Managing freight rail traffic that shares the Hartford Line is even more complicated,” Bernick says. “The rail network through Connecticut is much smaller than the highway network. Unlike highways, there often are few options for rerouting freight to shippers and businesses along the rail line, so accommodations are required that reduce windows for construction activities.”

Bernick’s team also faced an interesting challenge in that the right-of-way property on which the rail line is being built is owned by Amtrak, not CTDOT. This created a unique conflict because, as grantee of the program, CTDOT is responsible for all requirements of grants, including schedule and budget. However, because Amtrak owns the right-of-way, it has its own standards for design and operation.

“There were a number of disagreements along the way, but together with Amtrak and the Federal Railroad Administration, we reached the compromises necessary to make this program a success,” Bernick says, adding that Amtrak’s deputy chief engineer of track participated in monthly design workshops. “This level of engagement by Amtrak was critical to achieving consensus on complex design issues. It resulted in a program that meets all grant requirements, while staying true to Amtrak’s standards.”

Bernick says that through establishing clear definitions of roles, responsibilities, and communications protocol, the program is on track for successful delivery and can evolve as needs change during construction. It’s another example of how CTDOT goes beyond just providing a more efficient means of transportation.

“The Hartford Line will also become a catalyst for transit-oriented development around stations throughout the state,” Bernick says. “Rail service will encourage compact, mixed-use development within a quarter mile of stations and will connect people to job opportunities, housing, and retail and entertainment destinations.”

The profile of the Q Bridge resembles a battleship, a silhouette that’s enhanced by lights at night.

“During the planning phase, there was a consensus that the bridge should be distinctive and be identifiable as a signature bridge,” Mark Rolfe says. “After much consideration and consultation with the community, a design respectful of the Pearl Harbor memory was selected.”

George Phelps and His Team Build Better Together

Thanks to its innovative design and the coordination throughout CTDOT in completing the bridge in concert with a handful of other road projects, the Q Bridge is shortlisted for several awards: 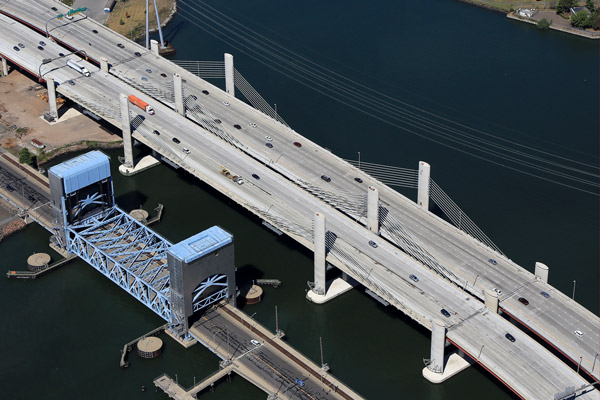 On the Right Track
Mixing History and Innovation

The tracks aren’t the only things being updated along the New Haven–Hartford–Springfield line. Much of the infrastructure along the Hartford Line in particular dates back to the 1800s, so tracks, bridges, culverts, and embankments have been replaced, cleaned, enlarged, and, in some cases, entirely rebuilt.

“This work was required to put the railroad in a condition to accommodate double tracking, faster speeds, and new stations,” Bernick says.

Construction of the rail line is being assisted by a 250-ton track construction machine (TCM) to lay almost nine miles of new track. The TCM can lay up to 1,000 feet of track per hour (500 ties), and close to one mile of track per day.

“TCMs have been used successfully around the world on some of the largest track construction projects in the last 10 years,” Bernick says. “These machines have been used in countries such as Italy, Northern Ireland, Brazil, India, and Saudi Arabia, among others. Only a handful of these machines exist in the United States.”