Nestlé USA recently completed a $21 million renovation of its three-story Harper Road Building in Solon, Ohio. It’s a move that will lead to increases in workplace collaboration and global connective capacity.

You may not know it, but Solon, Ohio, is the home of a growing frozen- and chilled-foods business. On an 82-acre campus near the intersection of Harper and Bainbridge roads, just outside of Cleveland, lies Nestlé USA’s corporate offices, a food-production facility, and a $50 million global Nestlé Development Center, where scientists are busy developing new prepared foods in sophisticated test kitchens.

But first, a few quick facts: Nestlé USA is a subsidiary of Nestlé SA, the world’s largest food company, with reported 2016 sales of $91 billion. The Solon campus has been established as the Center of Excellence for the Nestlé frozen- and chilled-food business. According to Kira Kabo, LEED AP+, head of facilities and security for Nestlé USA, the site employs more than 2,000 people, operates six shuttle buses between six buildings on campus, and manages the brands of Stouffer’s, Lean Cuisine, Buitoni, DiGiorno, California Pizza Kitchen, Tombstone, Jack’s, Hot Pockets, Lean Pockets, Libby’s Pumpkin, Nestlé Toll House, and Nestlé Carnation milks.

And it is on the bustling campus that Nestlé USA launched one of its latest building initiatives, the $21 million renovation of the Harper Road Building. The grounds were once surrounded by farmland, in close proximity to US Route 422 and an interstate highway system. This showed vast North American distribution potential, which compelled the Stouffer family to open a new frozen-food facility in 1968. To this day, the main goal of the renovation is to accommodate the move of Nestlé USA’s Technical & Production and Supply Chain organizations to Solon. 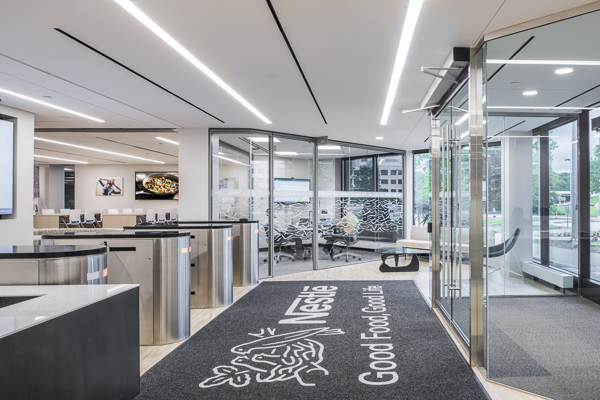 These Nestlé employees are the first in the United States to adopt the company’s Global Workplace Standard, an open, collaborative office concept. When the Harper Road Building is fully occupied, more than 600 employees will operate out of it, including 300 that will be new to the Solon campus.

“The previous layout was a maze of offices and a bit difficult to navigate,” Kabo says. “It was very nice for the time it was built, but work styles have changed dramatically since the late 1960s. The renovation of the building better represents how people in our business work together today.” Kabo adds that the design creates comfortable settings for small-group collaboration and allows for improved communications with overseas colleagues, both of which have become more important for managing these businesses.

Cleveland architectural firm Westlake Reed Leskosky, part of DLR Group, led the redesign work for the 1969 office building, but did not change the footprint of the 103,000-square-foot, three-story structure, where Stouffer’s operated before being acquired by Nestlé in 1973. Instead, the interior was redesigned to feature a naturally illuminated, collaborative floor plan, open-space workstations, and various meeting spaces while enhancing the connective capacity of the building’s IT infrastructure. Major building systems, including HVAC, the roof, and windows, were also replaced. As the first site in North America to implement the company’s global smarter workplace guidelines—already customized for Nestlé offices in Milan, Copenhagen, and Warsaw—the Harper Road Building serves as an important pilot project.

“The renovation of the building better represents how people in our business work together today.”

That means, among other things, that employees will enjoy some new office features. Thanks to an extensive procurement process, every employee will have a 60-inch-wide Herman Miller workstation for seated or standing use, with a blue tackable wall and storage under and behind the desk. As standard procedure, everyone will also receive a touchscreen laptop with dual monitors and a sleek, comfortable Herman Miller Aeron chair with adjustable lumbar support.

Bill Cooper, chief technical officer for Nestlé USA, works with a team of about 250 people in the Technical & Production group at the Harper Road Building. “The new space and open concept has been well-received by the teams, and a heightened level of collaboration and alignment occurs now almost effortlessly,” Cooper says.

A variety of multipurpose rooms surround the workstations and allow for flexibility in how and where employees work. Employees can take a deep dive on a solo project in a quiet room, jump on a call in a huddle room, or attend a meeting in any of the conference rooms with digital presentation tools.

On the whole, the interior décor is clean and contemporary, with a nod to the mid-century and Stouffer’s legacy: furniture by Herman Miller and Steelcase; finishes in stainless steel, stone, wood, and clear or frosted glass; and colorful accents that reflect the range of blues found in the company’s logos. One of the project’s most striking features, according to Kabo, is a pointillistic graphic-print created by Chicago’s Milliken Carpet, with a blue pattern that grows more pronounced as it approaches the exterior walls. All in all, the elements make for a smart, hip look. 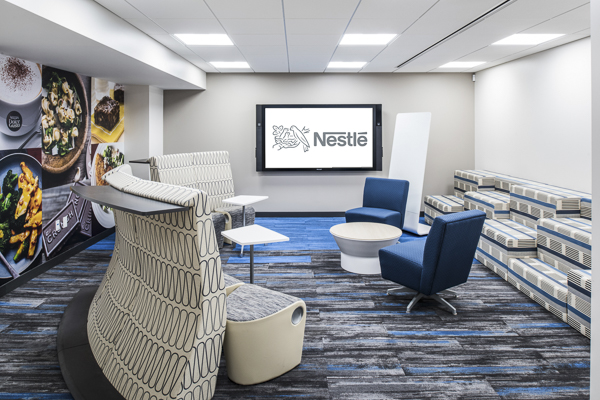 Because a major thrust of the global workplace guidelines—and the company as a whole—is an emphasis on health and wellness, there are a variety of nontraditional workspaces where employees can unwind and recharge. Kabo points to a meditation, prayer, and yoga room; common spaces called HUBs, with Nestlé coffee and snacks and places to collaborate; a rejuvenation room, with a ping-pong table, on the second floor; and a small library, which allows employees to donate and borrow books, as examples that set the Harper Road Building apart from most professional offices in the United States. Many of these spaces, she explains, are the result of a periodic survey administered by Nestlé’s human resources department, which helped identify employee preferences.

Emilee Landers, associate specialist for the Technical Applications group, has been with Nestlé for about three years. “The huddle rooms are ideal for project-specific meetings and work sessions, and the HUBs are great for one-on-ones with my manager or check-ins with other team members,” Landers says. “Overall, there is more collaboration and efficiency with my team in this workspace. Even as I’m working at my desk, people can stop by to have a conversation if needed.”

Of course, renovating a building that’s nearly 50 years old presented challenges. Notable among them was maintaining uninterrupted power service to the nearby Cleveland Clinic Solon Family Health Center and the Nestlé USA corporate office across the street. Both operate, along with the Harper Road Building, on a single power loop. Demolishing the freezers of a former test kitchen and correcting the pitch of the irregular ceiling line in the building also emerged high on the priority list for Infinity Construction, which was tasked with completing the job on an aggressive time line. 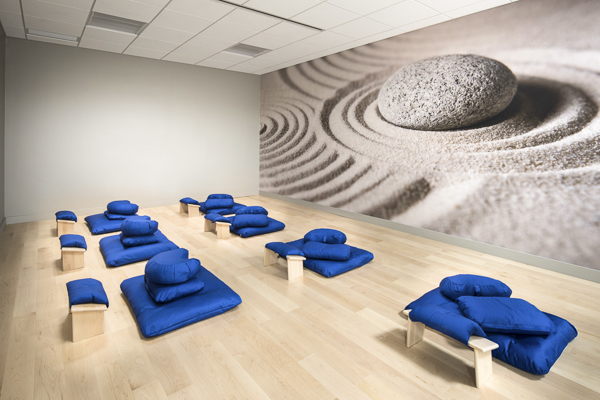 According to Jim Fantozzi, vice president of construction services for Infinity, coordination was key to a successful project. As the general constructor, Infinity brought together all teams—ranging from architecture and design to the maintenance and building staff—to ensure a work-friendly environment for employees during construction.

“We did a complete demolition of the space and rebuilt it from the ground up while the building was occupied on the other floors,” Fantozzi says. “Weekly planning meetings were helpful in identifying where we were working for noise control and to coordinate entrances to the building. Exit routes also had to be modified throughout the project.”

“It was a flurry of activity,” Kabo adds. “The construction team brought people in to work three shifts, six days a week, moving as quickly and quietly as possible to complete construction and make room for the new functions coming to campus.”

For Kabo, the project’s completion marks an important milestone. It comes at a time when Nestlé USA is moving its corporate headquarters from Glendale, California, to Arlington, Virginia, in part to be closer to key regulatory groups and non-government organizations pertinent to the food and beverage industry in Washington, DC. This will also better reflect its sales and distribution trends, as 80 percent of the company’s products are sold east of the Mississippi, and 75 percent of its factories are located in the eastern United States. All eyes will be on Solon, Ohio, to see how the new Global Workplace Standard can accommodate the shifting workplace needs of a growing business.