A public gift from retail tycoon John G. Shedd, Chicago’s Shedd Aquarium sits at the eastern edge of the city on Museum Campus. Its location affords a pair of equally cinematic views: the city’s downtown Loop to the west, and the glittering surface of Lake Michigan to the east.

“I loved coming here as a kid,” says Bob Wengel, senior vice president of facilities. “Taking care of buildings comes naturally to me; this was the opportunity to take care of a landmark.”

As a young man, Wengel was a carpenter, using his skills to pay his way through school. He was working toward a career as an airplane mechanic, but when he graduated, in the early 1990s, the industry was collapsing rapidly. Construction, however, was still booming.

He signed on with the Shedd in 1995. One night, he found himself assisting with the care of a beluga whale, a pale Arctic mammal with a canary-like twitter. Assigned to a position at the animal’s head, he had a unique chance to connect.

“I was able to touch that animal’s head and look it in the eyes,” he recalls. “How a kid that grew up on the South Side of Chicago gets that opportunity, I don’t know. I thought, ‘It would be amazing to be able to stay here.’”

By continuing his training and pursuing opportunities, he worked his way up through management to his current position. Today, he continues to make Shedd a leader in sustainability and environmental stewardship.

With a living collection, public and private events, and up to 10,000 daily visitors, the facility demands meticulous and collaborative care. The Shedd is staffed and operating 24 hours a day. Across three shifts, its workers coordinate repairs, habitat maintenance, and events. After the overnight cleaning crew takes out the last of the recycling, the first shift arrives at 7 a.m. to the same sparkling Shedd—every day.

“That’s the magic of this: you’re operating a building where so many things happen,” Wengel says. “Anywhere from 2,000 to 10,000 people come here every day, and when you come here the next morning, it looks like nothing happened.”

The Shedd is open to the public 363 days per year. With such a demanding schedule, responsible utility usage is a priority—for financial reasons and environmental ones.

The Shedd began seriously rethinking its sustainability efforts in 2010. After some lively debate, Wengel insisted that real progress would require a new, comprehensive understanding of how the organization could operate on a daily basis. That gave rise to a strategic sustainability plan with ambitious reduction targets, including a 50 percent cut to water usage by 2018—though the aquarium hit that target two years early, in 2016.

Wengel championed a focus on water, waste, and energy. His team took a chance meeting with Lakeshore Recycling Systems, which had just opened its new single-stream Heartland Recycling Center. One tour was enough to sell Wengel on its service.

“They said, ‘We don’t own a landfill,’” he recalls. “Ninety percent of their stuff gets recycled, and only 10 percent goes to a landfill that they have to pay for, so they have an incentive not to send it. When I look at the values of an organization, that aligns with us.”

To maintain efficient power usage, facilities personnel monitor and optimize the entire facility from a basement command center. Usage is reported in real time and compared against targets in half-hour increments. When use threatens to exceed targets, staffers choose from a variety of power-saving tactics such as adjusting chilled water from 39 to 41 degrees for a few hours on a hot summer day or slowing the motors and pumps controlling flow rates in pools.

The facilities team collaborated with research scientists to ensure that they could reduce power usage and keep animal habitats safe. “We did testing with animal-care teams and proved that even if we slow the flow rates for three to six hours a day, it doesn’t have any effect,” Wengel says. “The water stays the same for the animals.”

He emphasizes that human decision-making is a key component of this approach. Some elements of building management are automated, but Wengel has made sure not to “automate” his people’s behavior. Instead, they’re trained to make strategic choices to respond to any situation.

“We look at that target-setting software, and it doesn’t tell them exactly what to do,” Wengel says. “You give them a list of menus. It’s an exercise in giving them tools and teaching them how to think.”

The new technology and strategy introduced learning challenges, but continuous training and ambitious goal setting have kept the organization moving forward. In the coming years, as it adds more recent usage data to its models, Wengel expects that it may become more difficult to outperform estimates—especially after the recent dramatic reductions.

Along the way, the Shedd is continuing to develop its holistic culture of sustainability—in ways as big as rooftop solar panels and as small as serving drinks without straws. “Sustainability is conservation,” Wengel says. “When we’re doing these conservation projects, we can’t forget about the big one in our own backyard.” 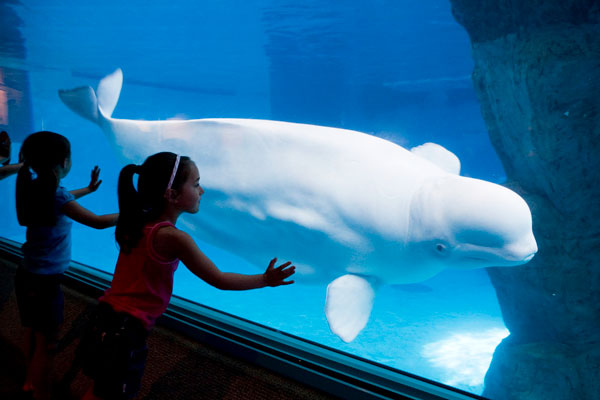 A Love for Belugas Passed Down

Bob Wengel kept fish as a kid, but he only became seriously interested in animals and conservation after starting at the Shedd. Then, his own children would ask him, whenever he came home from work, “Did you visit the animals today?”

“They thought that this job was a joke or something,” he says, laughing. It’s easy to grasp why: a place of such joy and curiosity as the Shedd couldn’t also be a place for work.

“I don’t visit habitats every day, but those beluga whales—those are my favorite,” Wengel says. “That’s what kept me here. There are 32,000 animals here, but there’s something about those belugas. And I’m probably not the only one who thinks so.”

Kimco Janitorial Services has served Bob Wengel and the Shedd Aquarium for more than 15 years. Our goal is to deliver consistent, quality janitorial services for Shedd and its patrons. Kimco’s purpose is to care for those we serve: our people, our customers, and our stakeholders. We offer customer-focused solutions, delivered by engaged and empowered service teams supported by leading technology.

A Higher Standard of Service

André Weir Designs for the Future

How Jason Toth Does More with Less