After three years of retirement, Corey Wong’s love for business brought him to software-development company Informatica, where he’s doing some of the best work of his career 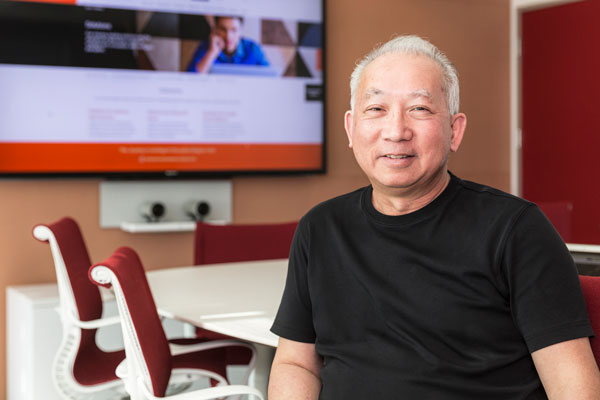 Corey Wong loved retirement. “For two years, my wife and I traveled the world,” he says. “I golfed every day. I ate tons of food. It was pretty glorious.” It might come as a surprise, then, that Wong’s retirement lasted only a few years. It wasn’t boredom, per se, that brought him back into the real estate and workplace solutions field, but rather what he calls “the itch.”

“I really missed the buzz of the workplace,” he says, and it’s easy to sympathize when he describes retirement as “quitting work cold turkey.”

“You can’t just walk away from 35 years of your professional life,” he says, noting that he missed the communication and intellectual stimulation his career had offered him. That led him to try consulting, which he spent the third year of his retirement dabbling in. And while it satisfied certain needs, it felt like he was only going halfway.

Still, the appeals of retirement are abundant, so when Informatica, the world’s leader in enterprise cloud data management, called, he wasn’t immediately sold on moving back into the workplace. “They called me two times, and finally, reluctantly, I said I’d just come in and talk,” Wong says.

He wound up being taken with the company, which was on the verge of a transformation that inspired in him his own ideas for reinvention. Despite being a 25-year old company, he notes, Informatica functions like a startup, and its emphasis on work-life balance was refreshing. He also mentions Informatica’s spirit of collaboration, which he describes as unique.

“They really want to collaborate,” Wong says. “I’ve worked a lot of places, and in 38 years I’ve seen a lot of people pay lip service to such things, but the people here are really with it. I noticed that right away when I interviewed.”

He said he’d be interested in coming onboard, but only if he and his team were made an integral part of the business.

“If I join, I need to come and really do something,” he says. “I’m not just going to come in and run your facilities and janitorial services. If you’re truly trying to make a difference with the workplace and the facilities and the locations, then I need to really be allowed to make changes.”

Informatica was sold, and Wong was given what he calls “free reign,” as well as direct access to the company’s board, with promised board approval within 24 hours. That was a deal Wong couldn’t refuse. He set right to work, too, and within two and a half years has transformed a staggering 80 percent of the company’s portfolio.

His first priority was the construction of customer-facing, high-performance office spaces—ones that he describes as “employee enabling.” This change, which involves shifting to an open office plan and better facilitates Informatica’s culture of collaboration, not only boosts face-to-face interactions but also assists with attraction, retention, and morale of the team, Wong says. Not only are the team members and leaders sitting in the open office; the CEO and CFO are, too.

“Some were a little bit concerned with the CEO being right across the way from them,” Wong says with a laugh. “They’re worried the CEO will be paying attention to what they’re doing, and I said, ‘Yes, but you get to pay attention to what the CEO is doing; it goes both ways.’”

A huge concern for Wong was ensuring that all these changes would impact the bottom line positively. By repositioning the portfolio the way he has, though, Wong has turned his transformations into a profit center. “We’re generating lease revenue from certain properties around the world,” he says. “We’re not a real estate company, but we’re going to take advantages of those areas where we can add to the bottom line.”

Most impressive of all, perhaps, is that Wong’s able to do it all with a lean team. “Between the five of us, we make it happen all over the world,” he says, and he’s not kidding. Despite Informatica’s business operating across multiple continents, Wong stays connected with his team on a regular basis through video conferencing and a structured, transparent leadership style.

Jonathan Parot Has Skin in the Game

While he loves Informatica’s startup mentality, he also knew there was space in the organization for greater standardization. For Wong, it’s integral to establish particular guidelines and processes for your team while also being up front about each team member’s goals, roles, and responsibilities. “Standard communication” is another phrase he uses, citing the need for regular meetings, “whether it’s through phone, WebEx, or video conferencing.”

Still, this isn’t to say he doesn’t still embrace the creative, open-minded environment of Informatica. “Just a little bit of structure and process and definition and goals goes a long way,” he says.

A nice bonus? Through all of it, he is still finding time to golf.

(Anything But) General Hospitals