Grubhub’s new rooftop deck is so inviting that you can’t help but want to go out on it—even when it’s covered in 8 inches of snow. “As soon as it gets above 40 degrees, I’m going out there,” jokes Wes Barker, Grubhub’s senior workplace manager, on a very cold Chicago day. “We just completed, so we’re excited to unveil it.”

The deck isn’t the only thing that Grubhub is excited to unveil. The company recently completed a major redesign of their Chicago headquarters. Barker’s excitement about the renovation was palpable on the day that American Builders Quarterly took a tour of the office, and it’s easy to see why: the space is bright, modern, and completely infused with Grubhub’s culture from top to bottom.

Ensuring that the company’s new space reflects its culture is a huge part of Barker’s role, and it’s one that comes naturally for him. Barker says he was a fan of Grubhub even before joining the company in 2011, and his knowledge of the brand, combined with his background in commercial real estate, prepared him perfectly for his current role. In addition to overseeing the day-to-day operations of Grubhub’s facilities, Barker is responsible for project managing large build-outs, managing real estate costs, and thinking strategically around the company’s physical growth.

Strategic growth was top-of-mind as Barker and his team began to prepare for the redesign. “We did have a lease expiration coming up, and we used that as an opportunity to grow the space the way we needed to,” Barker explains. “But rather than just adding space, we said: ‘Let’s think strategically. What does this space need to best support our culture?’ The space was developed to functionally and aesthetically represent who we are.”

Barker and his team found that, while Grubhub had always had an open floor plan, there was a need for more multi-use collaborative spaces where coworkers could gather to work together. Establishing a more functional all-company gathering space was also crucial in ensuring that everyone in the company can meet. Finally, Barker wanted to create spaces that allowed employees to get away from their desks and unwind during the day.

The redesign took roughly two and a half years from beginning to end. One of Barker’s first steps was assembling a project table—including leads from Shive-Hattery, Thomas Interiors, and BIG Construction (formerly Builtech Interior Group), as well as internal stakeholders), who he credits with making the process as seamless and rewarding as possible. “We built a phenomenal creative table full of people who want to problem solve and think about things differently,” he says. “Everyone at that table has grown with the organization, and they have a tremendous amount of pride in working with Grubhub.”

And while Grubhub has a fresh, new look, Barker believes that what’s stayed the same about the company is just as important as what’s changed. “Going from a smaller start-up company to now, what’s been important to me is that we’ve never lost our sense of scrappy collaboration and working together to solve problems,” he says. “I think that’s one of the things that always keeps me excited about the organization: in the process of becoming a publicly traded company, we haven’t lost that touch.” 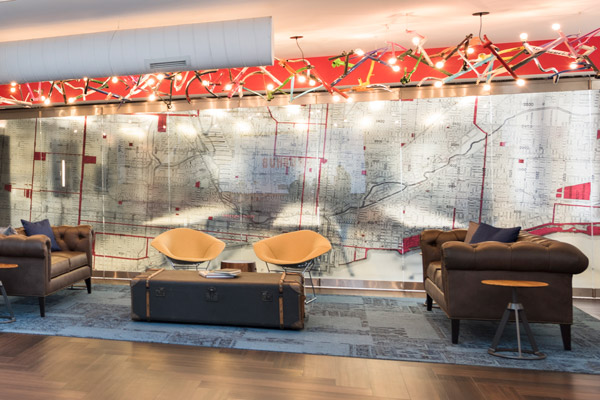 Guests at Grubhub are greeted by this light fixture made out of colorful bike parts. It’s a nod to the delivery bikers that make Grubhub’s business possible. 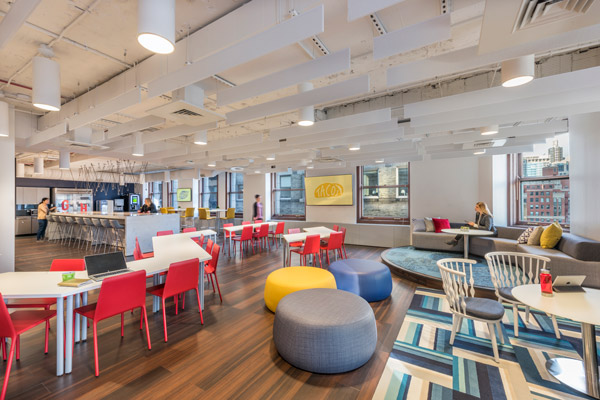 Food is at the center of Grubhub’s business, so it stands to reason that the kitchen is a centerpiece of its office. The kitchen is stocked twice daily with snacks and fresh fruit, and employees can choose between soda, coffee, or a Bevi soda water machine. A variety of multiuse tables, couches, and chairs provide spaces for lunch or impromptu meetings. 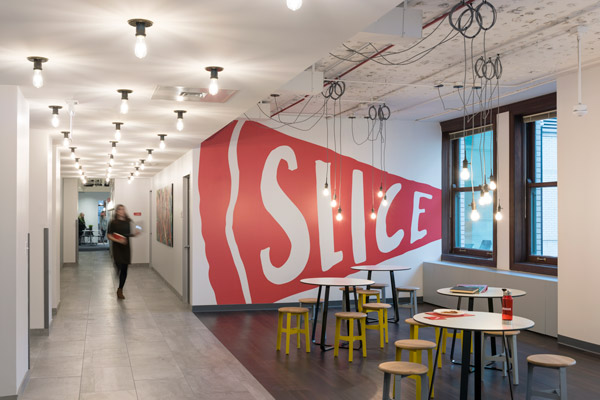 One of the office’s most unique aspects is Slice Pizza, an in-office pizza restaurant that’s entirely staffed by employee volunteers. Slice opens roughly once a week and sells a variety of dishes by the slice—but it’s not just an excuse for employees to chow down. “It also gives us a great opportunity from a product and user-research standpoint to test all of our new systems and to fix bugs,” Barker explains. The pizza joint-inspired exterior is made out of real bricks. 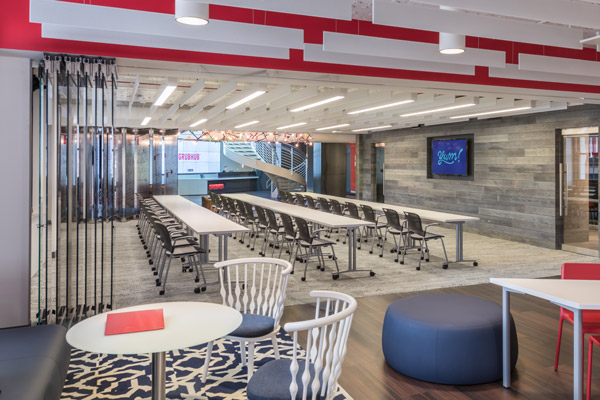 One of Barker and his team’s proudest achievements is this large meeting space, which can easily be converted from three separate training rooms into a large, all-company space. “The glass walls pop back. We reposition all the tables, and then every monitor and speaker is zoned to work together for a town hall setup. You can be in the back of the room and still hear everything the speaker is saying and see the material they’re discussing,” Barker says. The new design has been enough of a success that it’s now the standard across the country. “It takes us 15 minutes to set up for a town hall,” he says. “It’s a huge win.” 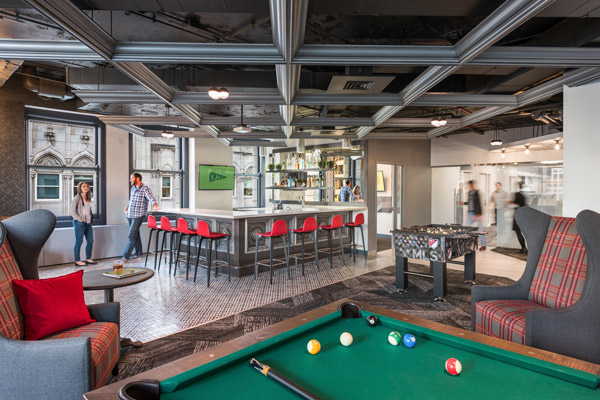 Grubhub’s game room calls to mind an old-fashioned study. It’s both cozy and formal, with high-backed armchairs and rich-toned wood. But it’s far from fussy: the room boasts billiards, shuffleboard, a foosball table, and a bar with a flat screen TV. “This room gets used in a multitude of ways: people come for a regular lunchtime game of billiards or shuffleboard, and some people have almost made this their regular workplace,” Barker explains. “It’s also where we have some of our company happy hours.” The original plans for the building, designed by famed Chicago architect Daniel Burnham, hang on the wall.