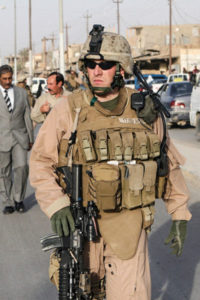 When Tollin Toler woke up in the rear cab of a high-backed Humvee somewhere between Fallujah and Baghdad, he couldn’t hear anything distinctly. Sound was coming back in bits and pieces. A fit of chatter broadcasting from the radio. Something about a black sedan and the triggerman. For a few moments, he was blind. Then, as the fog lifted from his eyes, he could make out indistinct shapes and a wash of sunlight. His buddy, Dan Wilson, another Marine in the security convoy of the 1st Marines Regiment, was yelling his name: “Tollin! Tollin! Tollin!”

Seconds later, he jumped out of the truck and dropped to the ground. Blood was running down his forehead. The last thing he could remember was the blackness of the carbide smoke, a flash of light. They’d been hit by an IED. Now he was after the triggerman, an Al Qaeda operative. A unit of combat replacements had come to meet him, and as Toler recalls it more than a decade later, “What in the world must they have been thinking? I can just imagine their terror. They’d been in country one week, and they see this guy coming up to them with blood pouring down his face, nothing on his mind but getting the triggerman.”

It was the spring of 2004, and the United States Marines, he says, were in a bloody guerilla-style street fight to reclaim the city of Fallujah, which, at the time, was largely under Al Qaeda’s control. Operating as a sort of highly coordinated street gang, Al Qaeda was raiding homes and killing the families inside, using the residences to set up makeshift IED factories. They had established an underground network of tunnels in the city. Bodies were being burned and hung from bridges. Blackwater contractors were being rounded up and executed.

Toler wasn’t terribly shaken by any of this, at least not at the time. As part of his training, fear had been purged from his mental map. Or, as he puts it: “I guess I just said, ‘Screw it. I’m going to go out fighting.’ Or, ‘I’m going to try not to go out. I’m going to fight harder. I’m going to kill a man before he kills me.’”

Toler is careful not to glorify his role; he wasn’t a foot soldier “kicking down doors.” Rather, he was part of a security convoy that escorted generals, joint chiefs of staff, actors, and other “high-value targets” to and from US bases. The unit also captured enemy prisoners of war—many featured in a deck of 55 playing cards depicting the most wanted members of Saddam Hussein’s government—and transported wounded soldiers and KIAs across hostile territory. They got “blown up several times,” mostly minor dustups from IEDs and mortar rounds that didn’t require medical treatment.

In many ways, he was doing what he had always wanted to do. “I’ve always been drawn to excitement, adventure, the outdoors,” he says. “I love guns, anything that explodes, violent movies. I grew up loving that stuff, so it was kind of a natural fit. I was born into it.”

But, he knew, at some point, it had to end. After finishing his first deployment in 2005, he spent two years in the Marine Forces Reserves and studied engineering at Parkland College, where met his eventual wife. He was recalled in 2007, when she was eight months pregnant, and returned to Iraq, serving as a rifleman for another four years. In 2013, toward the end of this time, his commanding officer flagged him as possibly having post-traumatic stress disorder. Following two days of cognitive testing led by a top neuroscientist, Tollin was issued a diagnosis and recommended for medical retirement.

The Business Savvy of a Marine Recruiter

The PTSD diagnosis did not hinder his professional ambitions. As a Marine Corps recruiter, he sharpened his sales skills, applying a technique called “consultative selling” to persuade interested young people to sign on. The approach, Toler says, queries a prospect’s core motivations and then offers a direct path to fulfilling those desires (i.e., “You want to join the Marines because life is tough. Why? You never had any money? If you don’t want to struggle with money, let me show you how the Marine Corps is going to get you to financial independence.”).

Additionally, he earned a BA in aviation science and business from Eastern New Mexico University, with tuition assistance from the military, and he developed other skills, too: public speaking, formatting a proper email, analyzing data to cut costs—“things you don’t learn as a Marine infantryman but that are very important for any employee in any company,” he says.

Moving Up the Ladder

By the time he was hired as a regional manager at LG Electronics’ service headquarters in Huntsville, Alabama, in 2013, Toler was an adept negotiator who could manage technicians effectively and keep clients happy. The company recognized this, and his role evolved quickly. Soon he was supervising 30 employees and managing teams in 10 cities across the southeastern United States and as far west as Phoenix.

At the same time, from 2015 to 2017, he earned his MBA, with an emphasis on finance, from Southern New Hampshire University. The degree was paid for by the US Department of Veterans Affairs’ Vocational Rehabilitation and Employment program.

Later, when a facilities manager position became available in the fall of 2017, he landed an interview and talked his way into the job. “I had never been a facilities manager, but I had the same skill set,” he says. “It goes back to my recruiting days. I figured out what they wanted and gave them that. I told them I had never fixed an HVAC unit, but I know how an HVAC unit works.  I can follow a process, and if it’s not an easy fix, I can get somebody out there who will fix it.”

He says he is proud of what he has accomplished in the new role. The Huntsville campus includes four large warehouses, corporate office suites, a data center, and a training institute. Toler is charged with keeping it all running smoothly. He manages new construction, employee cell phone plans, building security, janitorial services, lawn care, and the list goes on—from removing dying trees to repairing desk locks.

Before the close of fiscal year 2017, he had cleared out a lengthy project checklist that included adding a new breakroom and resealing the parking lot. His greatest achievement, though, has been his spearheading of a massive LED lighting upgrade, which he estimates will annually save the company $8,000 in utility fees.

But, in spite of his workplace success, the transition to civilian life has not always been easy. He takes medication for PTSD. He wrestles with the psychological repercussions of a Marine mind-set characterized by a self-flagellating fear of failure. While at work, he doesn’t talk much about his service. He’s unusually modest. Many of his coworkers are not aware he has a Purple Heart.

And, though legislation enacted under the Obama Administration has made it easier to receive retirement and disability payment through the Department of Veterans Affairs, the money is not enough to live on, at least not the way Toler wants: taking regular vacations, raising kids, etc. Most of all, it’s hard to give up the mantle of being an active-duty Marine.

“When you’re in the military, people want to buy you meals, shake your hand, wave to you in public,” Toler says. “Everybody celebrates you and what you do. When you take the uniform off, you’re just another civilian. You went from being on top to being on bottom; that’s a really tough spot to be. But, like anything else, you just have to hit the reset button.”

The support he’s received from coworkers at LG Electronics has helped eased that difficult adjustment. So, too, has his growing commitment to his family. On deployment in Iraq when his first daughter was born, he didn’t meet her until she was six months old. Now, she and his second daughter, ages nine and six respectively, are at the center of his life.

“Having kids shifted my focus; they become my number one priority,” he says. “I was driven to be a war fighter, but that was selfish of me, to be gone for a year at time on security contracts. And with the medical stuff, it’s not in the cards. Any time my daughters see war stuff, though, they say, ‘Daddy is that what you used to do?’ I say, ‘Yep, that’s what I used to do.’ They rub it in. But my youngest thinks it’s awesome I’m a builder. She calls me ‘the builder.’ It makes me happy knowing I’m doing something right.”

LACOSTA Facility Support Services is an MBE Corporate Plus-certified provider of janitorial, managed-labor, and painting services, specializing in manufacturing and industrial facilities across the country. Our mission is to create value through exceptional management and service delivery of critical facility functions, allowing our customers to focus resources on the core operations that drive their business forward.

(Anything But) General Hospitals

“Go Offline and Come Inside”