Where customers once pushed shopping carts, they now press weights and run on treadmills as Planet Fitness takes over empty retail spaces and retrofits them for a greener, healthier world

It’s not the business of national fitness chains to save the planet. But it’s still fitting that the company called Planet Fitness has a sustainability plan.

Indeed, the Hampton, New Hampshire–based chain that grew from a single club in 1992 to more than 1,432 clubs in 49 states—plus a few more in Puerto Rico, Canada, the Dominican Republic, and Panama—exists to provide an affordable way to stay in shape. With low fees and an enthusiastic 10.5 million members, Planet Fitness clearly meets its primary goal. Founder and CEO Chris Rondeau calls them stores, and he envisions up to 4,000 stores in the US alone at some point in the future.

With the conversation around environmentally friendly business practices continuing to grow, it’s an exciting time for businesses such as Planet Fitness that are looking to go green. The company largely converts existing buildings instead of building from scratch, a strategy made easier by the massive shift from brick-and-mortar to digital retailing. Planet Fitness takes it a step further, however, by employing the best-available technologies in heating and cooling, lighting, and water use that takes these old stores from the 20th to the 21st century.

The person who oversees how this is done is Allan Buell, Planet Fitness’ vice president of construction. He joined the company in 2013 and readily acknowledges he is not personally a crusader for the environment. But he came from Timberland, the outdoorsy boot retailer that was an early adopter of what he describes as “treehugger” ethos and practices. “The company always strove to be socially responsible, leading the way in sustainability,” he says of his 18-year tenure with Timberland. “They practice what they preach.” And Buell brought much of what he learned there to the fitness firm.

Understandably, Timberland consumers have a natural affinity for saving the environment. But it’s more difficult to tell if the 10.5 million Planet Fitness members share that same interest.

But that’s not what’s most important, Buell says. What is most important, particularly in a company where about 95 percent of the stores are owned by franchisees, is that the operation runs smoothly, efficiently, without interruption—and profitably. The company also wants to make sure that its members feel good about how they look and feel. 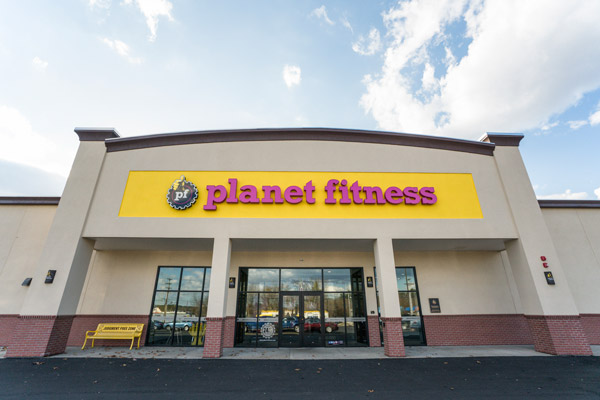 Buell and his team discovered that, in fact, sustainability measures, particularly those that involve efficient heating, lighting, and water use, are consistent with customer satisfaction and profitability. Planet Fitness franchisees rarely come from the fitness industry itself. Instead, they often have backgrounds in retail, food, and hospitality. Their primary skills are less about lifting weights and more about lifting revenues. If you can show them a way to make more and spend less money, they’re in, Buell says.

Planet Fitness’s focus on repurposing existing buildings fulfills both of those requirements. It’s a lot greener—and a lot more cost efficient—to renovate an existing structure than to demolish and build something new. Buell says the average club build-out cost is about $2 million. And it’s fast: “It takes about 12 weeks to build out a club and open it to the public,” says Buell.

According to a 2014 report from the US Department of Housing and Urban Development, there is also a social benefit to retail repurposing. “Local government officials, community organizations, and residents increasingly view vacant properties as opportunities for productive reuse,” the report says. “They are reimagining blight and dilapidation as urban farms, community gardens, and health facilities.”

Lighting is another area in which Buell has helped the company be both environmentally friendly and cost-effective. He has experience with early LED lights from his Timberland days, but current LEDs are much more versatile and affordable. The Planet Fitness stores now have a mandatory lighting standard that cuts lighting energy usage by at least 60 percent, achieved by replacing 400-watt metal halide lamps with 100-watt high bay LEDs, which are used inside and outside of the stores.

The company owns about 5 percent of its stores, where new technologies often get tested. This is where Buell’s team identified the lighting temperature sweet spot, as he describes it, which creates the best image for club members when they look at themselves in the mirror. “3,500 Kelvin works best on the main floor,” he says. “In the locker room it’s 3,000 Kelvin.” Taking it several steps further by his own initiative, a franchisee in St. Petersburg, Florida, built the chain’s first net-zero club, with 179 kilowatts of solar panels on the building’s roof.

Some additional green features include switching out showerheads that flow at 1.5 gallons per minute by utilizing High Sierra brand super pressurization models. The HVAC systems installed in almost every location to heat and cool these sprawling facilities, coupled with a centrally controlled intelligent energy management system, have reduced energy consumption by 15–20 percent.

Some parts of the fitness industry are experimenting with how to capture human-created energy, such as using treadmills that feed electricity back to the club. “I am interested in seeing where that can truly make an impact,” Buell says. Because if and when something like that becomes cost-effective, Planet Fitness’ adoption across thousands of stores could go a long way toward keeping its members—and the earth—healthy.