Christine Bishara-Murtagh of AHRC New York City has always been committed to public service, and her award-winning redesign is no outlier

Since 1949, AHRC New York City has been a fierce advocate for the neurodivergent population. While the mission may be three-quarters of a century old, the approach continues to be evolved and perfected for both those AHRC serves and those within the organization. In May 2021, AHRC NYC was recognized as one of Forbes’s Best Employers for Women and, in both 2021 and 2022, as one of Americas Best Midsize Employers.

In 2021, AHRC NYC also won a workplace innovation award from the International Facility Management Association. One of the major contributing factors was the complete redesign and reconstruction of AHRC’s NYC headquarters, which also serves as the location for the organization’s family clinical services, referral and information center, program record unit, and training and conference rooms.

Christine Bishara-Murtagh knows a thing or two about the redesign and renovation. It was her first project after being named associate vice president of design, construction, and capital at AHRC NYC. “It wasn’t just about designing office space, or a clinic, or a training center,” she explains. “It was all of these things, and it required wearing a lot of hats throughout the process. And it meant you had to do more listening than instructing.”

Bishara-Murtagh has spent the better part of her career working on behalf of others. She built over 150 different playgrounds in NYC in conjunction with Andrea Wenner’s nonprofit Out 2 Play, all while working for Margulies Hoelzi Architecture. She eventually realized that the nonprofit world aligned with her own personal values, which Bishara-Murtagh cultivated from an early age while serving in soup kitchens with her parents and doing other community-oriented work. She came to AHRC NYC 12 years ago and has risen through four promotions to her current role. But titles aren’t really what concerns her. 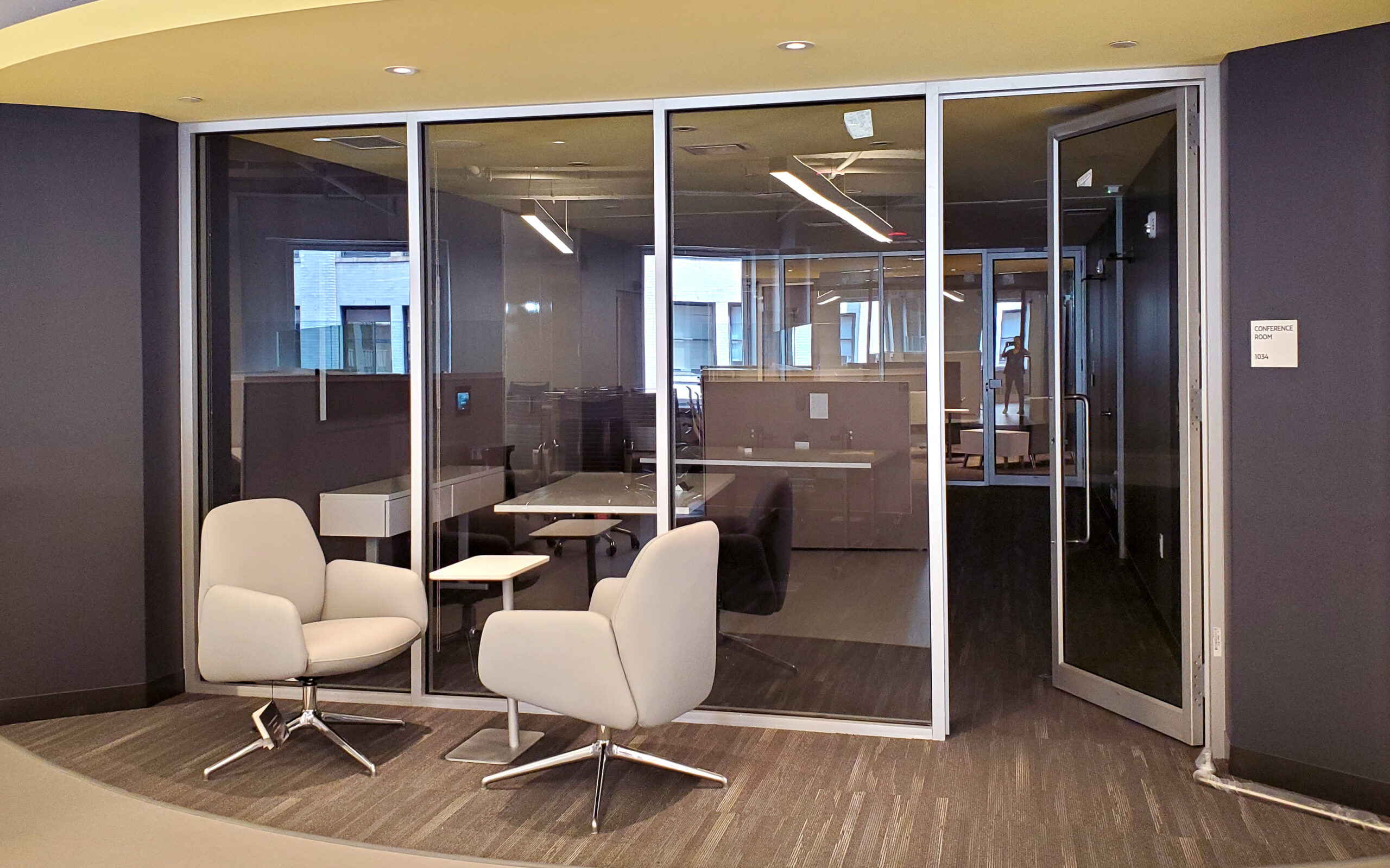 “You can make your mark in many different ways, and why not have it be supporting the most vulnerable population?” Bishara-Murtagh asks. “It’s not about the title. You should respect everyone for who they are and what they bring to the table.”

Taking on the headquarters redesign and renovation in 2019 was no small feat, regardless of her title. Bishara-Murtagh’s supervisor had recently retired, and she had only been in her new role four months before the pandemic swept the world. The entire project occurred during the most transformative environment of modern history.

In lieu of carpeting in the office spaces, AHRC NYC—along with the architectural firm Think! Architecture & Design PLLC—chose sustainable flooring material (Bishara-Murtagh has a significant background in sustainability and environmental management).

An open-floor concept was adopted, with additional “phone booths” available for more private conversations. Adjustable desks were integrated. Technology was integrated throughout the space, including but not limited to wave-to-open devices that enable doors to assist people with mobility issues.

Antimicrobial paint and fabrics were used for the entire project to keep the space functional as well as attractive. But Bishara-Murtagh’s team also went to great pains to not make any space feel too impersonal. 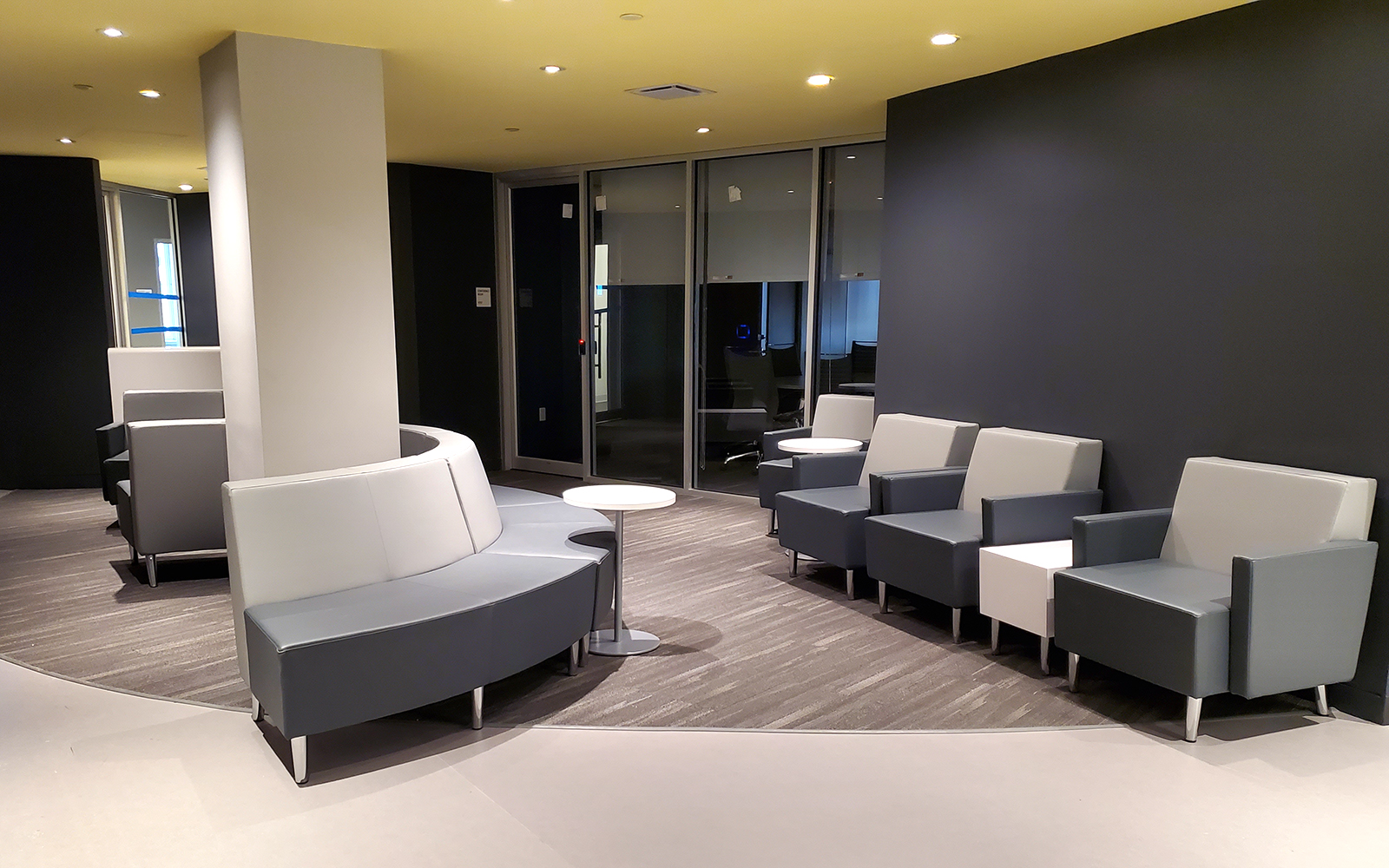 “We talked a lot about lighting, colors, and connections between programs as well as flow for the people we support. Many can be sensitive to environmental changes that other people might not even think about,” Bishara-Murtagh says. “A lot of our people need different kinds of support, from physical to emotional. Our goal was to create a space where everyone feels safe and supported, and that can mean different things for different people.”

As big of a project as it was, this wasn’t the only AHRC NYC item on Bishara-Murtagh’s plate.

“It wasn’t just that project,” she says. “We had many residential constructions and rehabilitation jobs going on concurrently. Houses didn’t stop needing work in recognition of the pandemic. We even opened a school during that time in Staten Island, where there was a huge need for services.”

Twelve years is a long time for anyone. What has kept Bishara-Murtagh working in the always-cash-strapped, always “less with more” nonprofit space?

The architect-by-trade says that the people she serves have kept her at AHRC NYC. “Everyone gets out of architecture school and wants to create the most beautiful space in the world,” she says. “You may not become a household name, but to the people we support here, I’m making a difference. I’m able to change their world.”

The Importance of Me Time

At 40, Christine Bishara-Murtagh continues to seek out new experiences, this time with her daughter. She spends up to nine hours a week at karate classes, sometimes with her eight-year-old daughter and other times kicking tail all on her own. It’s time to reflect, to exercise, and be disciplined.

“I haven’t always been great about taking time for myself,” Bishara-Murtagh says. “As I get older, I find that taking that time makes me a better mother, a better colleague, and a better person all around.”

James Jonsson Gets Back to the Basics

Bryan Porcher and the Personality of Facilities

How Mike Toftely Found His Niche

Michael Phelps Shares How to Repurpose Your Headquarters