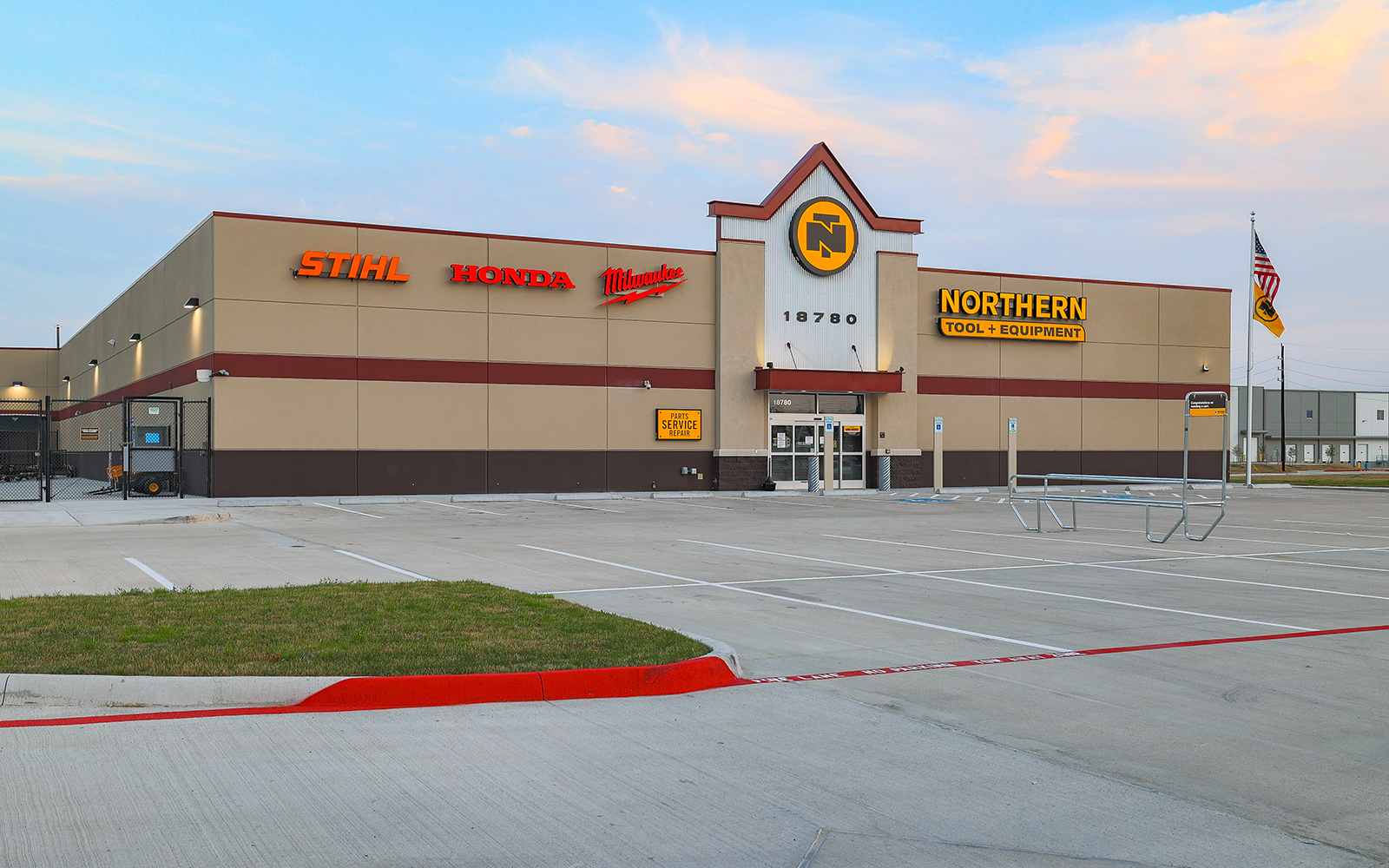 In his 12 years at Northern Tool + Equipment, Duane Boris has seen the retail chain double in store count. Now, as senior director of real estate, he’s helping to double that number again. For all the research, surveying, and dealmaking that goes into a launch, his favorite day is still the opening—and over the next five years, he’ll get to see many more.

“That’s really the culmination of everything the team has worked for: identifying markets, choosing a site, working on layouts, access, construction, all that,” Boris remarks. “What started out as just an idea becomes this physical structure that you can look at, walk through, touch—for me, it’s still the best part.”

Northern Tool + Equipment is an omnichannel retailer with store locations in over 20 states, along with an online presence, headquartered in Burnsville, Minnesota. Founded in 1981 in Eagan, Minnesota, the company first sold log splitters and hydraulic parts out of a residential garage. Soon, they were expanding a retail presence across the southern seaboard and throughout Minnesota, and by 1990, Northern Tool started producing its own equipment under the NorthStar brand. Today, it’s an integrated multichannel retailer offering a broad range of gear to hobbyists and professional contractors, alike.

Boris, meanwhile, spent his school years taking on jobs and installing drywall. When he finished his business degree, his first role was processing blueprints at a national general contracting firm. Soon, he was moving up in construction and development; and by 2005, he was developing major retail sites for Best Buy.

“When I got there, I learned a lot more about what goes into developing a site: site criteria, market demographics, access, and so on,” he explains. His previous experience in contracting and management helped equip him to lead store openings and remodels across the country, but the rapid pace of the work also tended to silo departments.

“We had so many stores to build, we were kind of putting them out like an assembly line,” he recalls. “Northern is looking at a very collaborative, strategic method. It really is a team effort.”

Boris joined Northern Tool as a development manager in 2010, before advancing to director and now senior director. Over the next five years, he’ll oversee approximately 100-plus new store openings, some in new markets, and others to fill in gaps where they already have some presence. For example, San Antonio, Texas, was considered “complete” a decade ago, but since then two new Northern Tool stores have opened, compounding sales in the region. In Atlanta, there were four stores; now the fifth is open, and a sixth is under construction. Houston featured four locations, but a ninth has just opened, and a tenth will soon.

“It’s a delicate balance between new markets and existing markets, where we’re not penetrating well,” Boris explains. “While in some areas, such as a typical metropolitan downtown, we know that’s not where our core customer is typically located.” New layouts have increased in size as well, from 15,000 to 22,000 square feet.

Executing this growth strategy has been impacted by complications and delays throughout the supply chain. Everything has been affected: steel, roofing materials, HVAC, and anything with a microcontroller is weeks or months behind where it might have been in 2019. In the past few years, Boris and his team have adapted by building extra time into every step of the schedule. It’s challenging to adapt to this loss of control, but these are the realities across the industry. This test of patience also has proven a growth opportunity, so Boris and his team are becoming comfortable with ongoing change.

“What might have been 8 to 10 weeks is now 20 to 24 weeks, and if we’re able to deliver early, great. Change and delays right now are inevitable, so we expect the worst and hope for the best,” Boris explains. “We’re seeing some normality come into the supply chain, but nothing like it was even six months ago, so we’re keeping it simple: control what you can control, mitigate what you can’t.”

The senior director has found other ways to grow in his time at Northern Tool. Once a boisterous leader ready to speak up first, he’s become more willing to take a step back, hear input from across the team, and collaborate on decisions. Listening has been the crucial growth element, especially as pandemic and economic factors continue to disrupt production in unexpected ways.

“Rather than being the first to share my opinion, I’ve learned to make a deliberate effort to listen and ask some probing questions,” Boris says. “Then, if there’s something that needs to be discussed, I bring up a suggestion—rather than a direction—to make sure that everyone is looking at the whole picture.” He advises other leaders to set aside the temptation of ego. While executing a fast-paced strategy across multiple markets, trust is key, and a leader’s trust in their team generates positive energy and successful collaboration.

Looking ahead, Northern Tool is developing partnerships with local high schools and vocational colleges, called Tools for the Traders, designed to promote careers in the trades. Some stores also feature competitions and in-store demonstrations in disciplines like welding. Those initiatives develop interest in critical work, while also fostering relationships with future customers. As the brand’s retail presence grows across the country, and those opportunities proliferate, Boris looks forward to seeing the impact in a new generation of trades professionals.

“We know that those are our core customers,” says Boris. “That builds not only brand awareness, but a loyal customer base going forward.”

Paul Stevens Belongs Where the Action Is

Jonathan Navallo Is Working Toward the Billions