Retail spaces across the globe have undergone considerable changes in recent decades, with online marketplaces pushing brick-and-mortar designers to completely rethink the value of every square inch of space. Innovation is critical, and even the most well-established of stores know that in order to keep loyal clientele circling back through the revolving front doors, it’s all about architecting experiences.

“When facing a blank slate, your mind can run wild,” says John Von Mohr, vice president of store design and planning for Bloomingdale’s. “You can break the mold, challenge old ways of thinking, and engage in blue-sky thinking.”

As a 25-year veteran of creative and architectural pursuits—with major projects logged with Macy’s, Neiman Marcus, and now Bloomingdale’s—Von Mohr has watched retail spaces get turned upside down over the decades, all while shopping trends continued to toe the line between cutting-edge and classic.

His latest project has him calling the shots on what he believes will be a masterful redesign for Bloomingdale’s flagship location at 59th Street and Lexington Avenue in New York City. The 11-floor retail space boasts a head-spinning variety of nooks and crannies, the result of decades of incremental growth. Now, after a long history of small pivots and conversions, the entire property finds itself in the midst of its most major overhaul to date.

“The flagship store demands that the iconic brand is strong—front and center,” explains Von Mohr. “But this isn’t a one-size-fits-all. Each area has its own personality, with a grander design scheme tethering all of the variations.” Those who work with Von Mohr appreciate both his grand design schemes and his creativity. “Working with John is exciting and fresh,” says Laura Maurelli of Mega Vision. “He has a great perspective on design and really pushes us to bring his vision to life.” 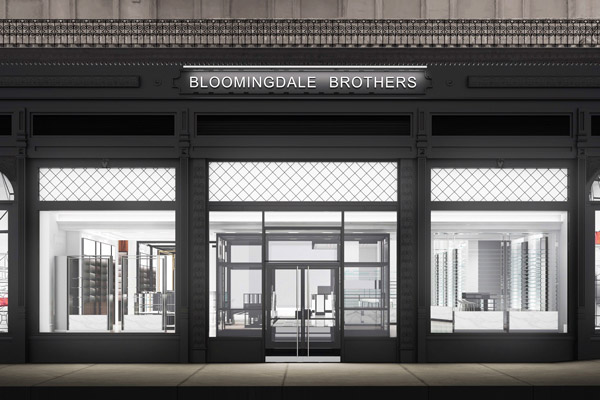 Von Mohr and his team are seeking to empower and delight customers in ways that truly cement the value of in-store shopping by taking on each area of the store with a specific experience in mind. Such experiential elements include the introduction of Style Advisors—a fresh and overtly unintimidating spin on personal shoppers—as well as entirely new immersive spaces ranging from demonstration kitchens to new bars and dining options. Add to that a rotating lineup of celebrity chefs and product demonstrators and a trip to Bloomingdale’s begins to sound more and more like a day at an upscale theme park.

“One of the aspects of design that we value is allowing our brands to have their voice, while at the same time allowing the Bloomingdale’s voice to remain the most pronounced,” says Von Mohr, hinting at the importance of maintaining a luxurious atmosphere without intimidating the casual browser. One such approach to this involves structuring inventory layouts that place high-end merchandise right across the aisle from more casual necessities, thereby increasing the variety of exposure without creating a break in the flow of the movement throughout the space. And while the aforementioned Style Advisors take to the task of helping a new generation stay chic, another time-honored team is stepping up its game by re-celebrating the joy of in-store wedding registry shopping.

“We really sought to elevate that experience, putting the registry greeting area in a prime location with great views and counter seating for casual engagement with associates,” Von Mohr says. “We also have fully enclosed registry offices, giving the customer a lot of options in terms of how they can register.”

Longtime Bloomingdale’s customers will also be delighted to learn that the redesign grants never-before-possible access to a whole new area of the historic property: a shipping-dock-turned-sales-floor that does more than simply increase inventory.

“It wasn’t part of the master replan,” Von Mohr explains. “But we took a piece of the property that was back-of-house—a dock where we would take in paper goods—and transformed it into a sales floor and restored the original facade.” And now that there’s a new entrance on 60th Street, Bloomingdale’s is able to activate a side of the building that’s been dormant for a long time, all while bringing more natural light onto the main floor.

With an ambitious list of build-outs matched only by an equally lofty list of new luxurious services, the design team had its hands full when it came to structuring the redesign process.

Once the largest shuffle-up reached a consensus, the team began to develop ever-evolving phasing plans, which covered 11 total retail floors—a total square footage that warranted the work of two design firms, both of whom planned, documented, and executed build-outs under the watchful eye of Von Mohr.

“The biggest challenge, construction-wise, is that the property is essentially 10 different buildings built over a period of 65 years,” he says. “Some existed on the site; others were built out over time. Some had different floor heights; some featured entirely unique construction techniques. Some portions were all wood, while others were concrete or steel.”

A building rife with character likewise warranted what John refers to, generously, as a “very creative” budget, emphasizing that some mid-process changes, including the repurposing of the shipping dock, wound up being among the biggest home runs of the entire renovation to date.

As of now, the complete redesign of the flagship store is slated to be completed by November, just in time for this year’s holiday shopping rush.