The construction of these new schools fell under the purview of newly hired director of construction and architecture John Hollo. Hollo made an impact quickly,
highlighting a willingness to take on a
landmark project right out of the gate. He believes the Everbrook brand showcases Learning Care Group’s commitment to applying new ideas to early childhood education from the ideological to the architectural.

Hollo, whose background was primarily in retail design with specific expertise in the development and maintenance of retail prototype design documents, says that the transition to childcare-based construction and architecture required some degree of adjustment. Luckily, his natural inclination toward problem solving was ideal for the job. “I automatically go to ‘How can we do this better or more efficiently?’” Hollo says. “Who are the right stakeholders to include in this conversation, and how do we manage cost?” As Learning Care Group has continued to expand, especially with the development of the Everbrook Academy brand, Hollo says it’s imperative to balance the company’s priorities with the ability to plan, organize, and improve efficiency. 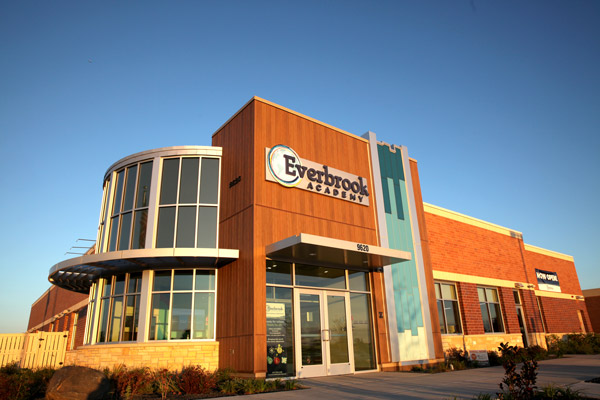 With the retirement of his predecessor, Hollo was promoted to vice president of facilities and construction. He says that the culture of collaboration is part of what has made his relatively short time at Learning Care Group so successful. “The facilities and construction team is a really special group of people that have developed the expertise and the sensitivities needed to work in a childcare environment,” Hollo says. He credits his team’s ability to take on a project as extensive as Everbrook Academy while continuing to service Learning Care Group’s 900-plus other corporate school locations.

Collaboration outside of Learning Care Group has also been essential in the development of the new schools. “In order to execute the Everbrook program’s aggressive expansion goals, we have built preferred relationships with A/E consultants, developers, contractors, and national account vendors,” Hollo says. “Through these relationships, we have been focused on cost efficiencies and quality for the construction of the new schools.”

Hollo says that the design and construction of Everbrook Academy required collaboration with virtually every department of Learning Care Group as well as outside design consultants. Hollo’s job was to build the school’s STEAM focus into the foundation of the school. Even the playground equipment was designed with STEAM in mind. “STEAM isn’t just part of the curriculum,” Hollo says. “Outdoor play activities and interaction between the staff and students could reinforce those principles.” Hollo says that Learning Care Group’s deep dive into scientific reasoning and STEAM-based design will also find its way into remodels for many of the company’s other brands and locations.

One of the defining design features of Everbrook Academy is the Brook, which is at the heart of every school. A multipurpose area allows children to play, read, and interact with STEAM zones where they can build structures, assemble robots, compose music, and engage in other problem-solving activities. Hollo says parent feedback has been tremendous, in part because they can clearly tell how much thought and design went into to each aspect of the Everbrook concept.

With 13 Everbrook locations planned to be in operation by the end of 2018, Hollo says his overall focus continues to be balanced with the challenges that the facilities and construction team face daily. “They have to be responsive to the needs of our field staff and understand the compliance requirements of each state licensing agency in which our portfolio of almost 1,000 schools reside,” Hollo says. “On a daily basis, we face all kinds of hurdles, twists and turns in the road, and legitimate emergencies.”

As Hollo continues to grow into his new role, he says, the collaborative spirit at Learning Care Group and the flexibility and dedicated attitude of his team continue to inspire him. “No matter how difficult it may be to pull these things off—whether it’s repairing plumbing, applying a coat of paint, or building a brand-new building—it’s something unique we can take pride in, in a way that is probably hard to express to people outside of the world of construction,” he says.

Working Through a Crisis

Hurricanes Harvey and Irma and the massive toll they took on Texas and Florida, respectively, left Learning Care Group, and its construction teams, working to reopen schools as quickly and safely as possible. “We had to break down an emergency situation and evaluate the impact and safety to our staff and crews repairing damage,” Hollo says. He adds that being able to open some school locations as soon as 24 hours after a hurricane hit is rewarding in a way that is difficult to explain. But, it wasn’t just a move for the company’s bottom line, Hollo says; his team knew they had children and families relying on them.

Advice from a Veteran