As its name implies, City Club Apartments is a boutique company that largely focuses on urban residential housing. With 30 communities and 10,000 apartments, the company has staked a claim in downtowns, offering the lifestyle features valued by city dwellers such as 24/7 concierge services, weekly social events, resort-class amenities, and internationally inspired designs.

It may seem a gamble, given the dire prognostications about urban life in the time of a global pandemic. But as of late 2021, urbanologists pointed out that proclamations about the deaths of cities have long been exaggerated: it was said in the late 19th century when the telephone was invented, again in the early 1970s with the dawn of the personal computer, and after 9/11 when terrorism was thought to make every high rise a target.

COVID-19 certainly changed some things, but the attraction to living in downtowns and some of the densely populated, adjacent suburbs with multifamily housing seems not to be among them. Roger Remblake, vice president of facilities and construction management for the Detroit-based developer/owner sees its buildings lease up and stay occupied, communicable viruses notwithstanding.

Remblake oversees the construction and maintenance of buildings through the first year of occupancy. While he has a bachelor’s degree in real estate management, he achieved that mid-career after working his way up through maintenance and building technology jobs. “I had a hands-on career when a vice president told me I should get a degree,” says Remblake, whose experience has taught him to understand what’s behind the walls, what can go wrong, and just how to fix it.

That kind of knowledge is invaluable in modern construction and renovations, especially because City Club strives to serve the sophisticated resident. These communities are chock-full of amenities that draw occupants and modernize urban living: features and aesthetics that mimic hotels with rooftop pools and “sky park” decks, outdoor kitchens, club rooms, fitness centers, and just enough funky decor in lobbies and other common areas that these buildings could as easily fit in Miami Beach as they do in Chicago, Pittsburgh, or Louisville, Kentucky.

Despite the four-season climate found in every City Club location that can interfere with outside activities, Remblake says, “It’s still worth it to build outdoor pools and roof decks, and other outdoor amenities, in places like Chicago and Minneapolis. Overall our buildings offer other living spaces beyond the confines of individual apartments.”

Remblake’s role goes deeper than aesthetic and marketing factors. The company builds and holds, renting out residences instead of selling them as condos to individuals or whole buildings to third-party investors, which creates added incentive to make those buildings operate efficiently over time.

“Roger leaves no detail to chance,” says Andy Wright, sales director for KeyTrak. “He’s able to fit all the gears and cogs together to create solutions that not only benefit the business but residents as well.” 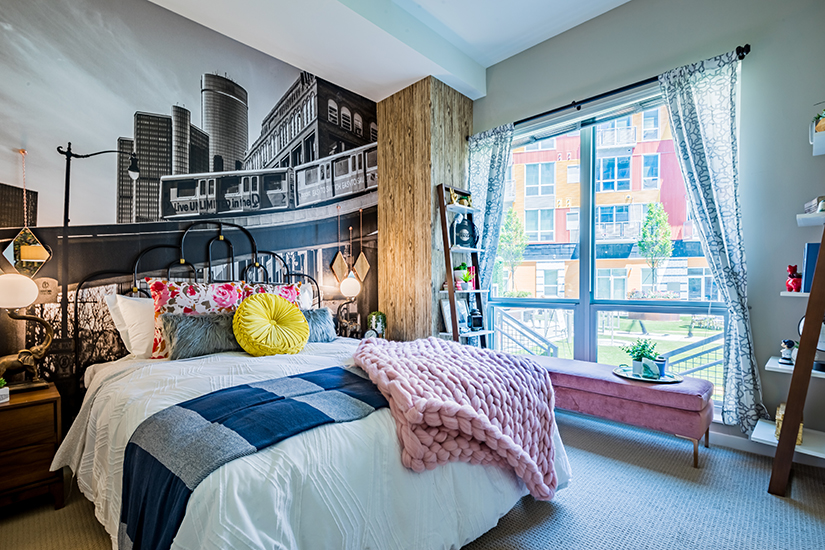 The company does that by constructing to the National Green Building Standard (NGBS), an ANSI-approved, third-party certified residential building benchmark. The certification looks at performance in lot design and development; efficiency in resource, water, and energy; indoor environmental quality; and building operation and maintenance.

“While residents pay for their own electricity, we still cover the common areas in the buildings,” Remblake explains. “The NGBS inspectors study our process for ensuring a tight building envelope, fresh air intake, LED lighting, and efficient heating and cooling of the common areas.”

That much is evident in the company’s properties recently opened, in development, or which are planned for the near future. In Chicago, the company developed a seven-story midrise in the city’s downtown neighborhood (known as the Loop) that offers a rooftop pool and outdoor deck, nestled among skyscrapers and overlooking a segment of the city’s iconic elevated trains.

A few miles north, construction for a new high-rise and mid-rise tower is set to break ground on a lakefront parcel; it will have hotel-like amenities, including ground-level retail, while the units will offer sought-after views of Lake Michigan.

In Kansas City, Missouri, the company is combining existing and new build structures around a huge courtyard, with a two-level restaurant, pool, and sauna. The lobby is in the original structure and features a vintage terrazzo floor.

In the Motor City, one of four City Club Apartment communities there is the CCA CBD Detroit, which is adjacent to Grand Circus Park and near Comerica Park. City Club Apartments CBD Cincinnati has a rooftop restaurant and is walking distance from the Ohio River riverfront and parks.

As one might imagine, creating urban residential communities are more complicated, and generally more expensive, than building on suburban land. Doing so requires a rare level of confidence.

“Our ownership is a visionary,” says Remblake, adding that this vision is coupled with scrutiny on such things as unit size and floor plans to make sure it fundamentally serves prospective residents. “They look at markets to identify what’s missing. It’s an art, learned over time. We are not a cookie-cutter organization.” Indeed, City Club Apartments sets a standard for the future of apartment living. By merging a historical knowledge of urban lifestyle with hospitality best practices, City Club creates what it describes as “the first true International Apartment Hotel brand, a differentiated brand and living experience creating long-term value for our investors and associates.”

Peter Provost Creates Space for Video Content of All Kinds