Across the globe, the market share of lab-created diamonds purchased by younger customers has reached the double digits, replacing traditionally mined diamonds. Before saying, “I do” at the altar, discerning customers are conscientiously buying these manmade equivalents to avoid contribution to the trade in gems mined from conflict zones, often referred to as “blood diamonds.” And by comparison, lab-created diamonds cost approximately 50 to 70 percent less—ethical consumption has an attractive price tag.

Swarovski, the international manufacturer and retailer that has been in the crystal gem industry for more than 125 years, does a brisk business with its Created Diamonds line. It’s consistent with the “attainable luxury” brand, which offers spellbinding crystal in a price range— about $75 to $2000 for most wearable items—that provides bling without inducing a credit score ding.

So the work of Jochen Schmidt, Swarovski’s vice president of distribution and real estate, requires him to find and build in a sweet spot: Swarovski stores need to be in upscale shopping areas and dazzle with luxury.

But those stores also need to beckon middle-class shoppers and invite those with a specific intent to buy as well as those visiting on a whim, all without being intimidating. That customers should feel encouraged going there for an important purchase while experiencing it as effortlessly—and just a bit indulgent.

Swarovski has it figured out. “We don’t want to exclude the casual customer,” Schmidt says. “The look and feel is high end, but we also transmit the message that you can afford us.”

Now, with some new store concepts Schmidt and his team devised in the pandemic period, the company is adding and retrofitting locations over the next few years that will further ensconce the brand as a playful, aware, and still a mesmerizing purveyor of beautiful things to wear and display. 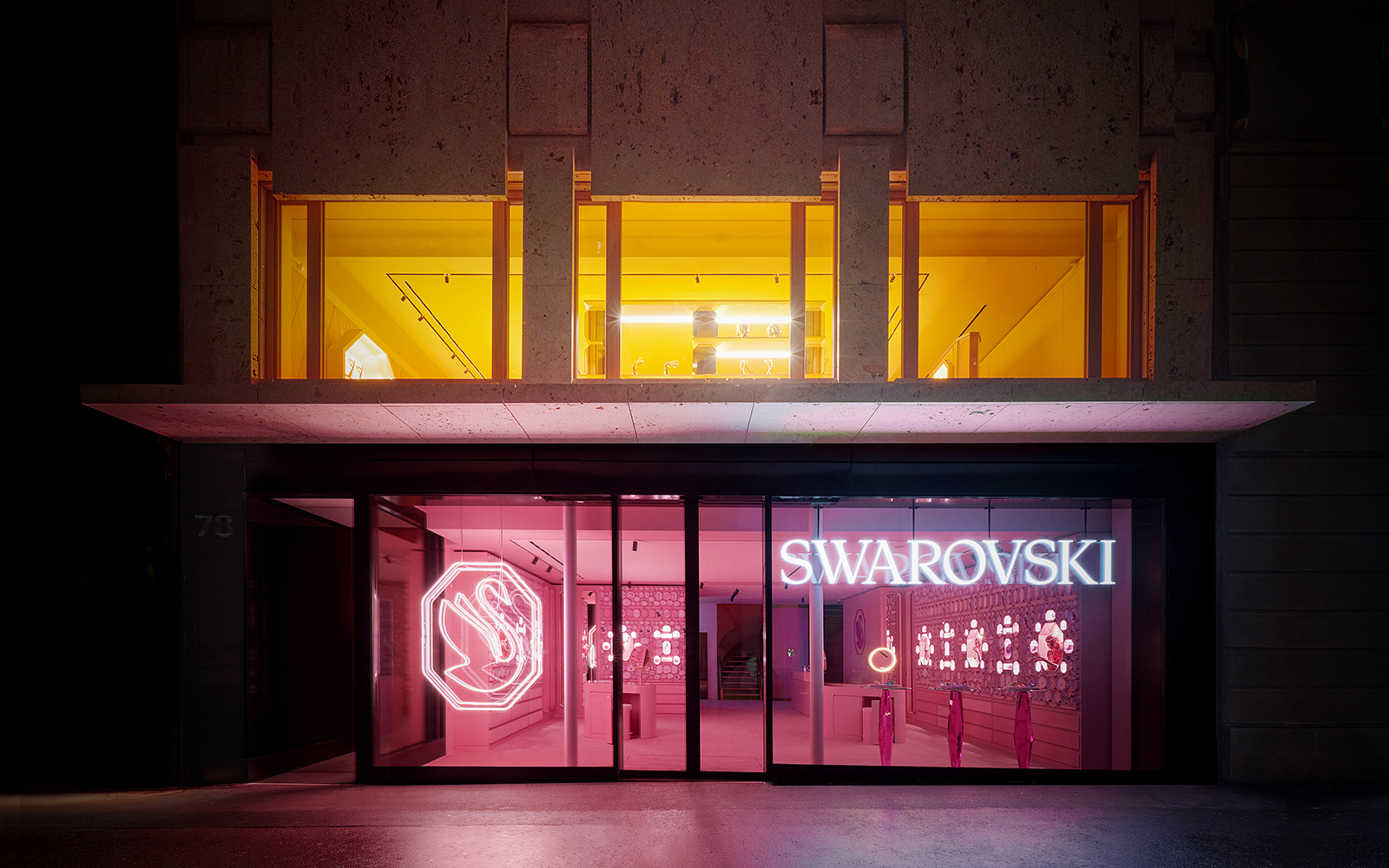 Judging by what those concepts look like, it appears that Swarovski has elevated the fun of shopping—even for those who do so only rarely.

Schmidt himself says he enjoys shopping. But he qualifies that given what he does for a living it’s a bit of a different experience for him than it is for the rest of us. “I pay attention to the look, the feel, and the lighting in stores,” says Schmidt, citing Starbucks Roastery flagships as examples of “retail storytelling.”

The company has a long history of its own storytelling. Early on, Founder Daniel Swarovski worked with a Parisian couturier who influenced Coco Chanel to incorporate its affordable jewelry into her designs (previously, women wore only mined gemstones as symbols of wealth). In the 1930s, actress Marlene Dietrich appeared in films wearing Swarovski crystal jewelry.

And the company today maintains Swarovski Crystal Worlds (Kristallwelten) in its headquarters in Wattens, Austria, where room-size art installations demonstrate the range and meticulousness of fine crystal: the experience is replicated to a certain extent in Austrian Swarovski stores in Vienna and Innsbruck.

The first of two new concept stores is “Instant Wonder,” already in place in about 30 locations, followed by a “Wonderlab” flagship store in Zurich. Schmidt says Instant Wonder—characterized by inviting pink, verdant green, and sunshine yellow walls, with octagonal-shaped boxes in varying sizes that frame products—was developed to create an “open, approachable, and easier shopping environment.”

He adds that it was devised early in the pandemic in 2020, “in 9 months and 10 days” from design to the first store opening in Milan. “We needed something bold, that says, “we’re here,” and makes it fun to go shopping.”

The company says Instant Wonder is a transition concept, with the Wonderlab serving as a larger and perhaps longer-range platform for its retail locations. Also bathed in rich, monochromatic hues, the first of these opened on Zurich’s storied Bahnhofstrasse, a flagship for the brand. It adds seating, a characteristic of jewelry stores heretofore more commonly found in Asia than on other continents as well in luxury jewelry stores.

Almost every world capital has its version of Bahnhofstrasse, and yet Swarovski has locations in suburbs and smaller cities. Schmidt bears the heavy responsibility of identifying which locations work best. So he relies on a digital tool, Esri Geo-Intelligence system, to figure it out. Optimal locations are found using data mapping that factors for population density, disposable income, age demographics, jewelry spending, proximities of the company’s own stores as well as those that can be considered competition, and traffic data.

That’s a starting point. Next comes the build-out, which the company does in the most sustainable ways possible. Materials are responsibly sourced, energy and water consumption are minimized, and onsite waste is managed. Since 2016, all stores are built on standards based on the LEED.

One other inclusive feature of Swarovski stores is that they are located near access to public transportation, as often as possible. That speaks to reducing carbon footprints and says something else about the company’s customers. They might wear Chanel, but they also ride the train to where they are going.

Attainable luxury need not be irresponsible.

Mario Miele Begins with the End in Mind

For Duane Boris, It Starts with an Idea