“Fit” is the operative word when talking about Levi Strauss & Co., but the company’s vision extends beyond just finding the right pair of its signature denim jeans for every customer. For Levi’s, it’s also about ensuring that both customers and team members fit snugly into their office and retail locations, which the company has sought to make as comfortable and safe as possible.

It’s the culture, after all, that helped draw Jeffrey Eggert-Peluso to his current role as the company’s vice president of global store design. He cites Levi’s as being one of the first companies to implement a code of conduct—they call it their Terms of Engagement—designed to protect basic needs and rights of workers in their supply chain. In 2011, Levi’s fortified that commitment with the Worker Well-being initiative, which, he says, “supports financial empowerment, health education, and gender equality for the people who make our products” and currently impacts nearly 100,000 workers.

Equality’s been a key component of Levi’s approach since its inception in 1853. As the first Fortune 500 company to extend health benefits to unmarried domestic partners over 20 years ago and the only California business to file an amicus brief in support of same-sex marriage 12 years ago, they’ve continued to be outspoken supporters of the LGBTQ community and anti-discrimination. They even release an annual Pride collection, in which 100 percent of the proceeds are donated to the Harvey Milk Foundation and Stonewall Community Foundation.

All of this lends itself to Levi’s Life and Style brand identity. “Through our products, marketing, and store experiences,” Eggert-Peluso says, “we hope to create a canvas that allows the individual to express their ‘authentic self.’”

Bringing this philosophy to life via design falls on Eggert-Peluso, and it’s a challenge for which he was ready when he joined Levi’s in 2013. After nearly two decades with Ralph Lauren, he had cultivated a keen understanding of “harmonizing business with store design.”

The key to harmonization? Collaboration. “As a rounded retail team—retailers, merchandisers, allocators, creative services, store design—we challenged ourselves to think outside of the norms collaboratively for Levi’s,” he says. “I led my team to draw out and frame actionable principles to translate to design.”

He adds, “We’re listening to our global consumers and the entire Global Store Design team – from India to Brussels to Shanghai to Mexico City to Singapore to San Francisco.”

The results were changes to Levi’s storefronts and entryways, as well as interior flourishes that create a sense of communion by juxtaposing LED light strips with light-toned wood and hot rolled steel.

A “big step forward,” he notes, was in the company’s reinvigoration of the fitting room experience. These rooms, after all, are vulnerable places for the consumer, and it’s often rare to find a fitting room design that prioritizes comfort.

Eggert-Peluso describes Levi’s revamped fitting areas as featuring ample space, crisp lighting, plenty of seating options, and strong, illuminated portals. Most striking, however, are the built-in call buttons, which make it easier than ever to summon a Levi’s team member.

This commitment to comfort extends to another key component of the Levi’s brand: customization. Just as the hunt for one’s “authentic self” centers around individuality, so too does Levi’s comprehensive tailoring options. In stores, you’ll find onsite tailors, direct-to-garment printing capabilities, and iPads that allow customers to browse designs by Levi’s tailors in cities such as London, Paris, Shanghai, and more. The latter option not only speaks to Levi’s global presence, but also embraces the increasing sense of connectedness that comes in the social media age.

All of these design elements are epitomized in Levi’s flagship store in New York City’s Times Square. Having opened in November of 2018, the store unfolds across 16,902 square feet and features the world’s largest collection of Levi’s jeans, from its landmark 501s to a vintage selection to a section devoted entirely to children. “Our retail was missing a global beacon for our fans to experience, so Times Square, the crossroads of the global community, became the focus,” Eggert-Peluso says.

John Matteo, owner of Prime Inc. who collaborated with Eggert-Peluso on the Times Square location, agrees. “Levi’s is a staple in the retail industry—they’re constantly pushing the envelope with respect to design and functionality, all in relation to the customer experience,” he says. “The Times Square store is just one example of how brilliant the brand is.”

Eggert-Peluso describes the store’s design thesis as “Levi’s Global Theater,” and that approach can be gleaned not just from the theatrical lights and abundance of LED screens, but also the ways in which its escalators work to frame the breadth of the retail floor. He makes a note of the landing that separates the two escalators and, in his words, helps visitors to “take the space and brand inward.” Meanwhile, the screens surrounding shoppers highlight the history of the brand, with images of cultural luminaries like The Ramones and Marlon Brando.

Capping all of it off is a clear commitment to locality and sustainability, be it in the artwork of graffiti legend Cey Adams or the store hangers wholly manufactured from recycled jeans.

While Eggert-Peluso admits he’s still learning and always will be, he’s established himself as a voice of inspiration for budding store designers at the Seattle-based Future Stores convention. There, he speaks on a number of topics, including the reality that understanding consumers is a journey, one he refined at Levi’s SoHo location before manifesting at the new Times Square store.

Cultivating a design from a philosophy, as shown in Eggert-Peluso’s work, takes time, not to mention passion and a genuine love for the brand.

Futuristic Store Fixtures is honored to be a key member of Levi’s core external team, in support of their store fixtures needs delivering brand-building environments. Jeffrey and his team are very professional in their field and we will continue to strive in our deliverables to support Levi’s retailing growth. 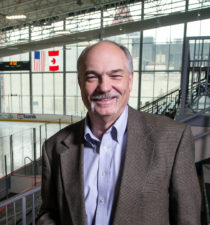 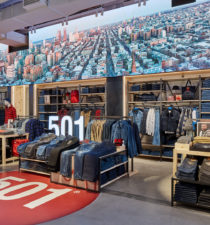 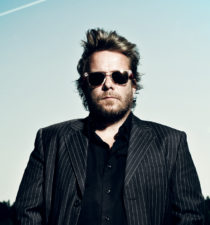 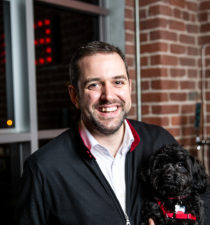